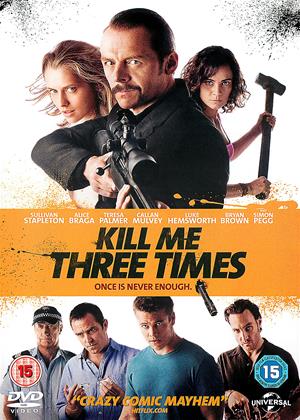 Reviews (2) of Kill Me Three Times

Simon gone to US to make some extra money, now to OZ. Billy C in Beautiful Joe way better film.

Almost everyone in it ends up dead, and the special effects blood squirts are in full use. Bit like a TV film, but goes along. Pegg OK in Hot Fuzz and Run Fat Boy Run, easy money in Startreks, but not convinced is a box-office attraction to be fair.............

The other reviews are slammers. I found it moderately funny in a 7 psychopaths / sightseers sort of a way. Django unchained often gets critical acclaim but is too nasty violent for me. This is much more funny violent, but still a bit brutal for 15 rated. Sure, Pegg may not have been the perfect casting for this, Kenneth Hadley from Sightseers would have been better (a must see film if you haven't) but would not have drawn many to the box office.

Listen to the music long enough in Kill Me Three Times and you’d swear you were watching a comedy. It certainly seemed like it was intended as comedy. Why else would you cast Simon Pegg as the narrative glue of this multi-perspective crime movie? Perhaps it was a casting decision in hopes that he could bring some class and charm to an otherwise despicable and mean-spirited little farce. Try as he might, Pegg can’t save this picture.

But what could he do? He has so little to work with in the role of assassin Charlie Wolfe. He’s little more than a cackling gunmen who cracks a few smiles in between his dirty deals and bloody kills. There are no interesting traits or personality quirks to this man who is all business and smirks. All Pegg is given is a gun and a mustache to make due. It’s not much in trying to make Charlie the least terrible of the players in this messy tale.

The plot revolves around three perspectives in a domino effect of revenge, scams and large sums of cash. Charlie is hired by wealthy motel owner Jack to knock off his wife Alice. But Charlie spends most of the job in the bushes watching as another couple, Lucy and Nathan, attempt to bump off Alice themselves. Turns out they have some money issues as well. And Alice has her own secrets as she is having an affair with the mechanic Dylan (Luke Hemsworth). All the money along with sexy twists and turns finds Charlie caught in the middle just trying to make a few bucks bumping off a few people.

Did you catch all that? If not, don’t bother breaking out a map for this one. It may seem as though this is an intricate little plot of murder and deception, but it’s really just a series of bad people making mistakes and killing each other over money and sex. I suppose it’s supposed to be funny the way these dimwitted business owners attempt to amateurishly dispose of a body. And I guess you might get a smirk out of Simon Pegg throwing a tantrum over being stabbed through the hand. But is that all the movie offers up as entertainment? No funny characters or amusing twists to this violent scenario?

If you cast Simon Pegg, you’ve got to give him a character he can chew on. You can see how much of himself he throws into a role be it a plucky wage slave (Shaun of the Dead) or a no-nonsense police officer (Hot Fuzz). In Kill Me Three Times, he has nothing to do, but react and fire a gun every once in awhile. The filmmakers most likely just saw footage of his screaming from Star Trek and Mission Impossible, cobbling together a character from those moments. He probably seemed like a great choice based on that assessment. But he works best as a likable man and this script finds him splashing in the same muck of disgust as the other characters.

Some credit can be given to Kriv Stenders who knows how to shoot a movie. Shot in Australia, he picks some good locations and stages some nice shots - be it in a car or looking down a cliff. The violence has some competence the way Stenders goes for the gruesome and bloody. There’s even some style in the way he stages transitions and graphics as if there’s more wit and class to this movie. He, too, seems to be giving it his best shot, but the script by James McFarland is sorely lacking in any engagement. Namely, there is nobody to care about in this plot. There’s not a character to root for, be invested in or even watch with appeal. Simon Pegg comes the closest to hitting that level, but only as far you could expect for a sleazy gunman that’s only interested in money for kills.

Kill Me Three Times presents three sides of a story and just strikes out with each angle. What was intended as fun and stylish comes off as morbid and ugly. No charm, no wit and no smarts are present in a movie that is needlessly convoluted and bitter to follow. Not even a Rashomon angle to the various sides of the story was approached which could have at least held the attention of the audience. All that is left is Simon Pegg in a mustache. Sorry, Pegg, but that level of comedy didn’t work with Mortdecai and it certainly doesn’t fly with this movie either.