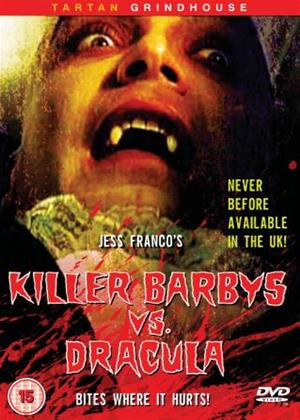 Unavailable
The Girl from Rio

Unavailable
Eugenie: The Story of Her Journey Into Perversion

Not released
The Devil Came from Akasava

Reviews (1) of Killer Barbys vs. Dracula

This, the sequel to the ‘Vampire Killer Barbys’ travelogue-style curio, comes 6 years after the original: time that has seen a further reduction in the typical budget of a typical Jess Franco film. As far as I can tell, only Billy King returns to play the same character as he did in the first film, although saucy Sylvia Superstar and the excellent Aldo Sambrell (in his last film) also return, playing different people.

We’re also joined here by Franco muse, the tireless Lina Romay as no-nonsense party-pooper Camarada Irina, and former underage ingénue Katja Bienert as Katia. Katia interviews various characters (including fake Dracula Peter Martell), but not The Killer Barbys, indicating her scenes might well have been shot independently from much of the film.

The afore-mentioned Dracula pretender is probably the most interesting character here. Full of indignant protests that he is the REAL Count, Martell’s cadaverous appearance works well wrapped in dark clothes and cape. He isn’t concerned with being out in daylight, but you wouldn’t expect him to be. There are even echoes of John Carradine about him.

All this is scuppered when the real Dracula (Kike Sarasola) turns up. It turns out he is a fan of bubble-gum pop, which is just as well, because this film is interspersed with many ‘live’ numbers from The Killer Barbys, or what remains of their number. Dracula is also unconcerned about appearing in sunlight, although the video filters added to some of his scenes might just be attempting to convince us night has fallen; it is difficult to tell. There’s a blind Doctor ‘Seaward’ character (Dan van Hussen), and even Bela Lugosi gets a mention. But we aren’t encouraged to worry too much about any of that – this is strictly superficial, one-shot silliness and pretends to be little else. Unlike the earlier film, there is no nudity and very little sexual suggestion (although there are a few expletives in the dubbed dialogue), indicating the project has been directed towards juveniles. Again, it is difficult to tell. Who cares really? As for the songs – I’ve heard a lot worse, which is just as well, because there are a lot of them.

Apart from directing, Franco also co-writes this (alongside Romay and José Roberto Vila). My score is 5 out of 10.