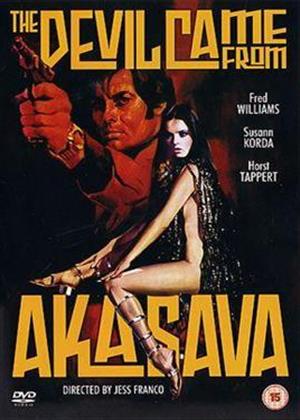 Synopsis:
Deep in a tropical jungle, Professor Forrester and his assistant discover a stone with both magical and primitive power. With it they can become masters of the world. But it does not bring them happiness - his assistant dies and the Professor mysteriously disappears while looking for a doctor.
The mysterious disappearance of the Professor, the death of his assistant and the existence of the stone attract from a number of parties - not all of whom are what they seem. First of all, Lord Kingsley of Scotland Yard appoints his top agent Jane to find the Professor; she is joined by Rex Forrester and they leave for Akasava to look for the Professor.
In Akasava Doctor Thorren and his wife run a practice for local natives. Thorren cannot explain the disappearance of the Professor; however he seems to know more about the stone. Thefts, muggings and murders are committed, as the various parties hunt for the stone.
Rex admits to Jane that he is not related to the Professor, but like her a secret agent. Together they locate the mastermind behind all the plotting, and seek to take him to London and to justice. But before they can do that, in the lust to posses the stone and its powers, another will die a horrible death - the final victim?
Actors:
Fred Williams, Soledad Miranda, Horst Tappert, Ewa Strömberg, Siegfried Schürenberg, Walter Rilla, Paul Muller, Blandine Ebinger, Howard Vernon
Directors:
Jesús Franco
Writers:
Jesús Franco, Paul André
Studio:
Oracle
Genres:
Action & Adventure, Classics
Countries:
Germany, Action & Adventure, Classics

Rent other films like The Devil Came from Akasava

Reviews (1) of The Devil Came from Akasava

Spoilers follow ... - The Devil Came from Akasava review by NP

This is the nearest thing to a checklist of Jess Franco trademarks as I have ever seen. So – a wall-to-wall sitar-spangled jazzy soundtrack (heard before in ‘Vampyros Lesbos’), familiar faces (Soledad Miranda, Howard Vernon, Fred Williams, Ewa Strömberg, Paul Muller and Franco himself), plenty of eye-watering locations, lots of zoom-ins (which, after seeing a number of Franco films, I am learning to love rather than tolerate) and a hurried, garbled finale. The only two elements this lacks to allow for a Full House are stablemates sex and horror, which are there, but only very briefly.

Franco, as he often did, casts himself in a particularly thankless role. At one stage, his character Tino offers to buy Jane (Miranda) a drink. After she looks him up and down, she declares, “I hate Brilliantine,” and flounces off.

The story is tighter than on some other occasions and strays into thriller/espionage territory, with Miranda stealing every scene as Jane Morgan. There are some scenes set in London, which have charms of their own. Introduced by a sweeping panorama courtesy of an aged film-reel taken from elsewhere, the subsequent locations are as blatantly Spanish as you could wish.

With the notion that a mineral can turn humans into zombies, you may imagine such creatures play more of a role here. Never a fan of the walking dead, Franco uses the idea as a background piece, and only featuring any living cadaver twice throughout (in disappointingly subtle make-up). The rest of the time, we are concerned with Morgan and handsome Fred Forrester (Williams) and their various misdeeds and adventures.