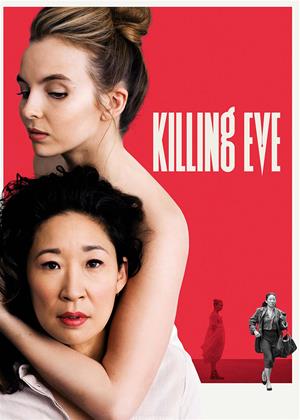 The title says it all. - Killing Eve review by JG

A series on BBC over two years. I picked up on the ads for the start of the second series and binge watched both via streaming. The ideal way to watch long complicated series, with twists, especially if they air over more than one year. Or you could wait for it on Cinema Paradiso.

It features some good acting by Sandra Oh, Jodie Comer, Fiona Shaw, Kim Bodnia and Sean Delaney who all play the roles required for their character with perfection. I had seen Sandra Oh before, not in Grey's Anatomy as IMDB suggests, but in Sideways; the others however (except for Kim Bodnia) were all new to me. Jodie Comer was lucky in having the best role where she could showcase her amazing acting talent covering comedy, action thriller, drama and romance with perfect British (adult and young girl), Russian, French and Australian accents. Not bad for a scouser. Her American accent was not as good, which was referenced in the script.

The series gets its thrills from the world of counter espionage and contract killings, drama from the character study of a psycopath and an investigator full of intuition and the strange connection that builds up between them, and its suspense from never quite knowing who was on which side. Kenny, Constantine and Carolyn all have strange characters too that are glimpsed but not fully revealed. The series also focuses on the surveillance and collection of data which has become a dominant feature of our modern world.

The series was also cleverly titled with it seeming inappropriate and right alternately as things progress, only becoming clear at the end, or did it? IMDB are suggesting that the American networks are asking for a third season. If there is one I shall watch series 1 and 2 again just before it airs.