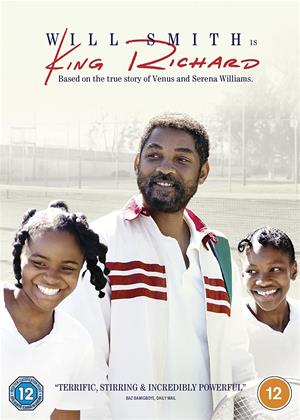 Not released
Nobody Walks

Not just another sports biopic - King Richard review by AER

Will Smith and the stunning tennis on offer are the reasons to see this. Surrounded by a fantastic ensemble cast playing his family which includes Saniyya Sidney and Demi Singleton as two of the greatest tennis players of all time, Serena and Venus Williams. Aujane Ellis plays the mother of this outstanding family in a biopic the details the lengths her husband, Richard Williams will go to ensure their daughters (all five) have a much better shot at life than he ever had. It's stirring stuff as Will Smith doesn't portray RIchard as an likeable man - he's mercenary and calculated to the exclusion of much else except for a shining love for his family. It's the performances and the characterisation that elavtes this above the standard sporting biopic. The end match seems to go on for about a day, making the film slow to halt at the end - another negative is that the dramatic score doesn't shut up for a second. Even Will Smith pouring a glass of milk gets an orchestra!

Good performances, but it's not going to change the way films like this are made. In that respect, it's quite pedestrian.

Watch it for Will. His very best role in years.

The names of Venus and Serena Williams are more recognizable than Richard Williams. He wasn’t just their fathers but a coach, businessman, and driven to dedication from fear of failure. While we may one day get a bigger picture on the tennis duo of sisters Venus and Serena, King Richard serves as an intriguing picture focusing on their original rise as young champions through the questionable actions of their father. It’s also another chance for Will Smith to flex his dramatic acting muscles.

Smith, however, is playing a tad more outside his comfort zone. He plays Richard with a cautious tone yet determined cadence. He keeps himself constantly busy with late shifts as a security guard at night and long days of keeping all his daughters busy. Whether it’s academics or sports, he pushes them towards something that will make their lives better. It’s an admirable effort but also concerning with how much promise he places on his girls, ensuring every day that there’s a better tomorrow as long as a plan is in place. The daughters go along with dad’s word with little questioning.

That may be good for Richard and his plans but it becomes a frustrating trait for his wife Brandy (Aunjanue Ellis) will grapple with. She appreciates Richard’s dedication but also finds his obsession with ensuring and micromanaging the success of his girls may do more harm to their marriage than he realizes. Richard specializes in studying and haggling his way into success. When it comes to Venus and Serena, he doesn’t just teach them tennis. He films them for posterity and studies up on all things tennis, including coaches and athletes he should try talking to. It’s only after so much pushing that he manages to convince an A-list coach to give his girls a shot. That shot, however, only goes to Venus and Richard leaves the heartbreaking news up to Brandy to deliver.

It’s for this reason why Richard becomes the centerpiece of this tale that essentially ends with Venus and Serena gaining real fame. They absolutely earned it but the push from their father is one that is worth observing for all the hardship and warts that came with it. There’s a rollercoaster of emotions for such a character. He has a good heart but finds himself struggling to maintain that focus. Gangs will at one point try to come on to his girls at the tennis courts and Richard takes their punches. He’ll take more punches later on and nearly compels himself to shoot these gangsters, only regretting doing so when some other gang gets to them first. Even when Richard feels as though he’s made it with a coach who will accept his girls and investors willing to throw money his way, Richard makes careful decisions not to jump at the first check that comes his way. This works to his benefit but also against the trust of his family.

Smith’s performance has an ease of comedy where it never feels like he’s trying too hard for a laugh yet manages to land one with every scene he caps. This is particularly true any time he shares the screen with Joe Bernthal, playing the training coach Rick Macci. Rick wants what’s best for the girls but also finds himself conflicted with how Richard keeps subverting his expectations. Rick was under the impression that the sisters would be playing Juniors but Richard only wants them to wait until they go pro. Richard will later turn down a hefty contract with Nike because he believes there’s more for his girls. It’s this maddening strategy that makes the character so frustrating but also enduring. He so casually turns down millions of dollars because Venus doesn’t like the looks of the contract and diverts the conversation to getting something to eat.

Of course, the two girls who play Venus and Serena, played by Saniyya Sidney and Demi Singleton respectively, do a fantastic job. They have a real charm to how they just want to please their dad but also show some excitement on the courts. They’re so engaging that I hope they grow up to continue playing the characters in a more extensive story on the lives of Venus and Serena more than Richard.

Despite a handful of monologues, King Richard isn’t just your standard sports biopic built for Oscars. There’s enough care and heart placed in the performances as well as some skillful editing to speed things along that the 2.5 hours breeze by. For seeming like little more than a Will Smith vehicle, it’s surprising just how effective this picture manages to be for evoking drama out of a family struggling over tennis.