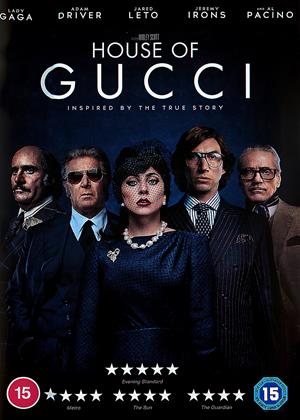 Reviews (5) of House of Gucci

This true story dynastic melodrama just about manages to avoid becoming too much of a soap opera mostly thanks to the committed and rather excellent performance by Lady Gaga. But there are moments of silliness, almost pantominesque in the characterisations and depiction of the rich Italian culture. This is the story of the fall of the fashion house Gucci. Patrizia (Lady Gaga) is the daughter of a humble transport business owner who one evening meets the lanky and shy Maurizio Gucci (Adam Driver) at a party. He is studying to be a lawyer and has no interest in the famous fashion business owned jointly by his father (Jeremy Irons) and uncle (Al Pacino). Patrizia and Maurizo fall in love and marry despite his father believing her to be a gold digger. She eventually persuades Maurizio to become involved in the family business and untold wealth comes their way but the company is riddled by tax scandal and corruption. Eventually their marriage sours but Patrizia will not relinquish her hold on her privileged wealth easily. This is an interesting story and director Ridley Scott recreates the 70s through to the 90s with his usual attention to visual detail. Both Lady Gaga and Adam Driver are superb throughout. There is some comic relief in Jared Leto's heavily prosthetically portrayal of Paolo Gucci, the sort of family fool, who causes all sorts of problems for the family although the performance is occasionally too much a cartoonish caricature. But this is a Ridley Scott film and well worth checking out.

Ok, loved the Italian accent English but the dialogues are wierd like translated word to word from Italian.

Gaga's acting is good but there is not much glamour or fashion for a film related to Gucci.

The film feels unnecessarily long and I was thinking of stopping it halfway through.

A good film, mostly thanks to the amazing performance by Lady Gaga in the lead female role - House of Gucci review by Philip in Paradiso

This is the story of fashion house Gucci, in Italy, in the 1970s. A glamorous and strong-willed social climber, Patrizia Reggiani (played by an astonishingly good Lady Gaga) flirts with, dates and eventually marries a clumsy, shy and unambitious heir to the Gucci fashion empire, Maurizio Gucci (Adam Driver). This is a family saga combining business, ambition, love and lust in a surprising manner.

The film is good from start to finish, in my view, and I enjoyed watching it. Some have compared it to a soap opera: I think that is unfair. It is better and more than that. The story itself (as it happened then) is quite amazing, and the film seems to be faithful to the known facts. However, the film has some flaws. The actors speak English with an Italian accent (the movie takes place in Italy and the USA, and the characters are supposed to be Italian, bar a few of them); the only one who is truly convincing is Lady Gaga (who is American, but of Italian extraction). Lady Gaga's accent sounds real, but it is more than that: her mannerisms, her attitudes, her reactions are convincingly Italian. I wouldn't say that of the others, and I found Adam Driver relatively unconvincing on every level (but, then again, I have always felt that he is over-rated). The film may be a bit overlong too (at 2 hrs 30 mins).

In the last analysis, it is a good film, but not a masterpiece. Without Lady Gaga, it could well have been a rather dull flop. But her striking performance is simply fabulous. She saves and carries the film all by herself, from start to finish. It is not a movie about the House of Gucci, but about Patrizia, the intruder: you end up waiting to see what she is going to say or do next, all the more so since she seems to enjoy rocking the boat. She is simply fantastic, with her unconventionally attractive looks. So, the focus of the film is her, and she rises up to the challenge with gusto. On this basis, I would recommend the film and would say it is worth watching.

Good film, it's just the caracters are not very relatable. It is well made and good performances. Never the less the film despite being long is good entertainment.

Misses the mark - House of Gucci review by JR

Tonally, the film is all over the place - some soap opera, some attempt at serious drama, some attempt at humour, but succeeding in none of them. Despite all that, Lady Gaga proves once again what a good actress she is, and Jeremy Irons and Al Pacino are predictably good . The characters are caricatures and it's hard to get involved with them. Adam Driver seems miscast as Maurizio, or maybe it's just the poor writing. When it is not going full tilt, the film gets bogged down in boring business contract negotiations, and there are some unexplained plot jumps. The whole thing is too long and would lose nothing by being half an hour shorter.

The sordid tale of the Gucci family and brand is certainly one built for a soap-opera style miniseries. It’s surprising that it took this long for such a project to ever come about. But it’s a project that seems better suited for a miniseries than it does a movie, even when placed in the crafty hands of director Ridley Scott. Even though this film has a lot of decadence for its A-list casting and fantastic production design, such a film feels rushed, even with over two hours of room to let such a sprawling story.

The best part of the picture is by far the talent placed on the screen. Lady Gaga melts into the role of Patrizia Reggiani, a woman with big dreams of being more than just a manager for her father’s trucking company. Adam Driver is a delight as the conflicted, shy, and bitter Maurizio Gucci, cautious about trying to distance himself from his exceptionally wealthy family. While trying to muster Italian accents, these two do have great chemistry, where their many sex scenes have great built and eroticism.

While we’re on that topic, there’s a key scene that displays the biggest problem with such a film. There’s a great moment where Maurizio, having rejected his father’s wealth, takes a job at Patrizia’s father’s company and plays soccer with the employees during a break. Sweaty and energized, he then meets Patrizia in one of the trailers where they have sex. It’s shot well but the soundtrack crowds the scene with era-appropriate music. It’s as if the film is trying to remind you of where we are in the timeline at all times, as though the subtitles and fashion weren’t enough.

The film constantly features characters talking about little else than the nature of their business and their current romantic affairs. Jeremy Irons is always a treat, playing the stuffy elite of Maurizio’s father Rodolfo Gucci, but he spends more time talking about old money and his dead acting career than just about anything else. Salma Hayek had a chance to be a bit of a wild card as Patrizia’s partner in crime but she spends nearly the entire film only speaking about ways to get her the most money.

There are two standouts who spend more time eating their scenes than spouting the essential exposition. Al Pacino always brings exuberance and doesn’t skimp when playing Aldo Gucci, the founder of the fashion line for the family and the most welcoming of the marriage between Patrizia and Maurizio. His commentary between moments of feuds and business discussions is a lot of fun to watch. The most questionable of characters is by far Jared Leto’s take on Paolo Gucci. His motives are simple enough that he’s allowed a handful of moments to just be the pathetic eccentric who desperately wants to play a bigger role in the Gucci empire. His scenes range from laughable to jarring, though he does pair well for his few scenes with Pacino.

House of Gucci has a lot of great components but rarely does it build to little more than a stylish biopic that is more pleasing to look at than become engrossed in the tragic story of business, fashion, love, and murder. It feels as though a handful of scenes were left on the cutting room floor and I hope that one day they will see the light of day in a director’s cut. If there truly is more, House of Gucci may very well be a great Ridley Scott picture. In its current form, though, while being placed so close to his recent release of The Last Duel, it’s only a mildly pleasing picture, where the look of Adam Driver in a knit sweater is more appealing than the scene of him ignoring his wife at a ski resort.