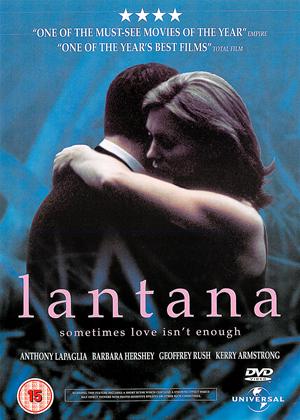 Lantana is a variety of flowering shrub which apparently grows like a weed in Australia, forming a tangled undergrowth with attractive flowers on the surface. And so it is with this Australian film which deals with the intertwined relationships between a number of people – superficially satisfactory, but deeply entangled and unsatisfactory beneath the surface. It focuses on trust in relationships and exposes just how corrosive a lack of trust can be.

Dr Valerie Somers (played by Barbara Hershey) provides marriage guidance / relationship counselling. She is disturbed by counselling sessions with a gay man who is in a relationship with a married man and which she relates to her husband (played by Geoffrey Rush) whose relationship with his wife is under tension from grief stemming from the death of their daughter. Policeman Leon Zat (played by Anthony LaPaglia) has an affair with Jane, whom he met at Latin dancing classes which he attends with his wife Sonja. Unknown to her husband, Sonja also has counselling sessions with Dr Somers.

Valerie Somers has a car breakdown and disappears on a lonely back road. Jane sees her next door neighbour throwing something into the lantana opposite her house. She find a woman's shoe - Valerie's shoe. She reports this to the police, so losing the trust of her neighbour. Leon investigates and confesses his affair to his wife, so losing her trust – and so it goes, each character losing the trust they depend upon and searching for ways to rebuild it. And through it all there is a mystery – what has happened to Valerie...

All the characters are related to each other, through visits to Dr Somers, or by sexual relationship, by happenstance or other contact. Each relationship comes under serious strain – which, if any, will survive?

'Lantana' is excellent – a first class character drama, derived from a stage play, but not appearing too 'stagey'. I thoroughly enjoyed it – the acting is excellent throughout and the tangled, intertwined storylines are resolved only to the extent required in real life and there are no artificial happy endings. The film has won a host of Australian awards but I wasn't aware of it until searching for films starring Geoffrey Rush who starred in the more recent 'The King's Speech'. 4/5 stars – highly recommended.

Relationship drama, loosely constructed around the investigation into the death of a young women, is an atmospheric mood piece about the sadness and loneliness of the city (Sydney). A contemporary film noir. Features a wonderful cast (Geoffrey Rush, Barbara Hershey...) and an unusual, original plot twist.