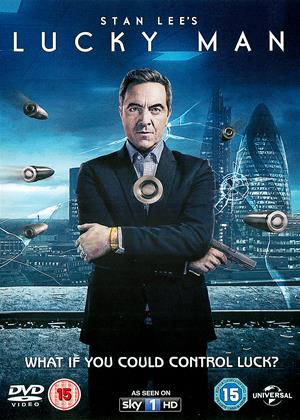 Synopsis:
What if you could control luck? Would that be the greatest power you could give a man, or his worst nightmare? "Stan Lee's Lucky Man" is a bold crime thriller series based on an idea by the legendary comic book writer Stan Lee. BAFTA nominated actor James Nesbitt plays Detective Inspector harry Clayton, a brilliant but troubled cop and a compulsive gambler who is in danger of losing everything. Marry is near rock bottom, his family have left him and he is losing big at a casino when he is approached by the beautiful and enigmatic Eve (Sienna Guillory).
She gives him a mysterious bracelet said to endow the wearer with immense luck, but this kind of luck comes with a price and soon harry finds himself right at the sinister heart of a crime wave sweeping through London. With luck on his side he sets himself against the dark forces circling, but will it be enough to save him and his family? D.I. Harry Clayton is about to step onto the roller coaster and find out just how fickle Lady Luck can be...
Actors:
James Nesbitt, Eve Best, Sienna Guillory, Amara Karan, Darren Boyd, Omid Djalili, Stephen Hagan, Burn Gorman, Jing Lusi, Steven Mackintosh, Kenneth Tsang, Peter Guinness, Mark Quartley, Mark Ebulué, Phil Dunster, Stephen Thompson, Ben Aldridge, Anita-Joy Uwajeh, Stan Lee, Jotham Annan
Directors:
Andy De Emmony, David Caffrey, Brian Kelly, Jon East
Producers:
Chris Clough
Creators:
Stan Lee
Writers:
Stan Lee, Neil Biswas, Ben Schiffer, Rachel Anthony, Alan Westaway, James Allen, Stephen Gallagher
Aka:
Stan Lee's Lucky Man: Series 1
Studio:
Universal Pictures
Genres:
British TV, TV Action & Adventure, TV Crimes, TV Dramas, TV Mysteries, TV Sci-Fi & Fantasy, TV Thrillers
Countries:
UK

Great premise, let down by some rather mediocre performances in leading roles with the exception of the mesmeric James NESBITT. Worth a watch . if only the script had been a little tighter and the editing better,and the supporting performances stronger this could have been a real winner., hence only giving the 3 stars rating.

I was intrigued by the premise- a compulsive gambler is given a 'lucky' bracelet that he can't remove and which endows him with supernatural luck. Sadly, after the first couple of episodes, the narrative falls back on cheesy old devices like the hero cop being falsely suspected of corruption, a 'Mr Big' who's involved with the hero's estranged wife, and those traditional threats to the cop's family- even a wildly contrived prison break sequence.

Maybe the writers should have concentrated more on the workings of 'luck' and less on the bang-bangs and boys' action hero stuff. If it weren't for the wonderful James Nesbitt, who acts everyone else off the screen, and the nippy camera work, I'd have dumped it after one episode, but I shan't bother with the next series.

Lacking in genre clichés (which is always a good and welcome thing) and showing teeth there where is mostly needed: Lucky Man: Series 1 by veteran comic book creator and demigod Stan Lee is a great escapade of detective storytelling that will enamor the hearts of many. In it, Londoner and detective Harry Clayton pushes his luck (I know) out of his life by indulging in hazardous habits like gambling, alcohol and other addictions that ultimately helped in severing his ties with his lovely lawyer wife.

Until his luck finally changes.

An evening like any other, and we find D.I. Clayton throwing a hand at the roulette wheel, minding his own business when a mysterious, attractive woman disrupts his habits with an offer he couldn’t, for the love of god, refuse. So, after a night well-spent, Clayton finds himself in a possession of a magical bronze bracelet that overturns luck in his favor. Pretty neat for a one night stand, don’t you think?

Soon however, detective Harry Clayton stumbles upon one after another deed that shake the core of his very foundation: winning a roulette hand, escaping an awkward conversation and a dead body of a certain guy who’d Harry owed some money.

Could the bracelet really work?

Actor James Nesbitt portraying Clayton continues with his endeavors that somehow get in the line of duty. Only, he is unable to dispose of his bracelet since it’s locked onto his wrist. One thing leads to another and our lucky hero soon learns his luck had little to do with the right circumstance, and more to do with stripping other people of THEIR luck in order to get that luck for oneself.

Lucky Man: Series 1 has a terrific cast that propels the whole ordeal above your typical-detective show lingering; James Nesbitt as Harry Clayton leads the party with his charming English with and a bigger-than-life image; Steven Mackintosh playing Detective Superintendent Winter is both authoritative and endearing in his presence; Sienna Guillory as the embodiment of a trickster Goddess is equal times happy-go-lucky, as she is terrifying as all hell. Needless to say, Lucky Man: Series 1 features an ensemble rarely seen in such productions whose chemistry makes for an interesting watch.

Lucky Man: Series 1 is foolish at times, rendering circumstances unbelievable even to ‘series about luck’ standards. Granted, if not for its charming, borderline film noir nature – Stan Lee’s Lucky Man would fall under its own, crumbling weight in a series of highly improbable events that unravel in seemingly successive fragments.

Eventually, Lucky Man: Series 1 is a fun way to kill time on weekends, at your cubicle at work or home under a pile of mismatched blankets in color and otherwise. Go ahead and rent it already.