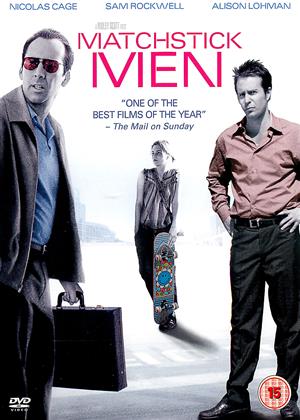 it's not as you think - Matchstick Men review by CP Customer

The whole movie puts you on a false track - you could even say it plays the same game with you as the conmen do with their victims. But once you get over the bafflement at the end, this movie is very clever, and the performance of Nicholas Cage and Alison Lohman, as their relationship develops, is heartwarming. Watching it the second time, I actually still really enjoyed it, because there is so much to discover.

There is no way to give an opinion on this film without in some way spoiling the plot twists but as the film is fifteen years old one would hope most people had seen it by now or probably will not care too much. We’re not talking Endgame spoilerage here.

The film has more than a few problems for me. It starts of interesting setting up two let’s be honest, fairly despicable, characters and gives us a good long insight to their short run cons, clearly laying out Sam Rockwell has the quick thinking, young ambitious buck, with Cage as the neurotic and challenged older mentor. How a person with this many mental problems is able to hold onto a high-stress process as conning innocent ordinary folk is the first flag the popped up and took me out of the film somewhat. The glue that holds this together is Rockwell, playing a role he has down to pat, and Cage much more controlled that some of his more outlandish roles, even the OCD which must have been like catnip to him is treated with some deal of realism and sympathy by the film and Cage.

With the introduction of a big risky con and the ‘didn’t know I had a daughter’ daughter the film suddenly careers off into to two distinctly different film genres. Do we get a scary but ultimately satisfying con of some thoroughly greedy and unpleasant people or do we get a redemption of a dishonest but flawed man as his real humanity is brought to the surface by a daughter he loves but never knew about?

Well actually the film is neither and tries albeit unsuccessfully to confidence trick us into taking one of those two paths. Except of course most people, if they are paying attention, can see what is coming before it gets anywhere near the conclusion. Which begs the question why doesn’t experienced long-time con man Roy see it all coming? There are some obvious signs and glaringly things that happen that make you think ‘oh come on’ and then you’re out of the film.

Even more insultingly as the film closes we get a never-asked-for injection of saccharine, a meeting that frankly (no pun intended) makes no sense after what happened in the previous hour and a half and a feeling of disappointment that stays with you after the credits and ended and long gone.

The Sting did this many years ago in a much more entertaining way and I suggest The Grifters for a more gritty story, Dirty Rotten Scoundrels for more fun and Paper Moon for a mix of both before you even look at this one. I’m honestly sorry to be this way about a Ridley Scott film and a film that features Sam Rockwell but it’s entertaining enough but is quickly forgotten and I would not go out of my way to watch it again.

Matchstick Men fails to ignite the senses, flares for a short while and then burns out quickly – yes I went there.

This was a good movie one to really be enjoyed as it shows a man who is a con artist getting into difficulty controlling his health condition then having to deal with his daughter that he hasnt seen nor even knows she exists for 14 years.