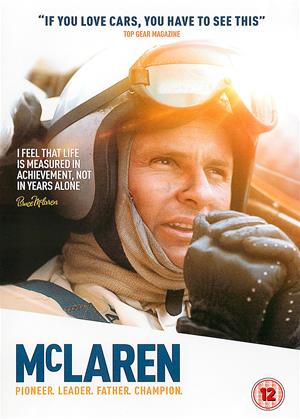 Synopsis:
The name McLaren is synonymous with motor racing excellence and stands today as a symbol for automotive superiority. Yet what is less known is that the brand was the creation of one young man from New Zealand - a pioneer who followed his dream and who against all odds led a team to greatness and himself to become a motorsport champion and hero. Despite the tragic end to his life, Bruce's legacy lives on and his vision, passion and drive to innovate continues to be at the heart of advanced motor engineering to this day. A truly inspirational story of a young boy from humble birth who dared to take on the elite world of motor racing and win.
Actors:
Dwayne Cameron, Mario Andretti, Alastair Caldwell, Matt Coldrick, Emerson Fittipaldi
Directors:
Roger Donaldson
Producers:
Fraser Brown, Matthew Metcalfe
Writers:
James Brown, Matthew Metcalfe, Glenn Standring, Tim Woodhouse
Studio:
Universal Pictures
Genres:
Documentary, Sports & Sport Films
Countries:
New Zealand

When documentaries such as McLaren (2017) come onto the scene, a comparison with the masterful ‘Senna (2010)’ is as inevitable as a breathing air or a screeching tire. What’s more, ‘Senna (2010)’ set a nearly unreachable threshold for sports documentaries which McLaren (2017) now tries to surpass. Well, it turns out it’s not that easy after all. Let’s compare the two: Asif Kapadia’s work is full with drama, tension, and borderline thrilling elements which make the offering that much more appealing to a wider array of audiences; on the other hand, Roger Donaldson’s McLaren (2017) is not as nearly as poignant as the former, but offers much in the spectrum of petrolhead adrenaline for repeatable viewings over a Sunday afternoon barbecue with friends. Friends who also happen to be petrolheads that is.

The film follows legendary racer, mechanic, and a generally nice fellow Formula 1 legend Bruce McLaren in his arduous journey to become the No.1 guy when it comes to this competition. The way the story’s presented is through various stitched home videos, incredible race footage, and interviews with the ones closest to Bruce. McLaren is a very intimate and close take on this character, a bittersweet journey into the minds of one of the most successful drivers in Formula 1 right before his tragic death in 1970.

The story takes the audience through Bruce McLaren’s childhood in New Zealand, as told through the lenses of his widow Patty. At moments, a colorful dramatization over-shines the documentary feel to McLaren, and this is necessary to “patch up” the narrative gaps in the life of this racing giant. Still, some elements in the film may possibly alienate all but the most hardcore racing fans and leave the casual documentary viewers in the dust (like yours truly). Still, it’s a poignant journey that will leave no one feeling indifferent.

In regards to its technical aspects, director Roger Donaldson uses everything on his disposal to tell this deeply personal, but also very broad story as genuinely as he can. To this extent, the camera work (dramatization), the editing, sound mixing, music, and sets are done flawlessly and up to par with the best blockbusters out there. Really, a job well done.

Perhaps the most heartbreaking segment of the film is that four of the main contributors have passed away during filming. This strange mix of art and life brings a sense of finality to McLaren which would crack even the toughest of nuts to shed a tear or two. As did I.

Finally, McLaren is an excellent feature that both casual racing fans and hardcore petrolheads should most definitely see.