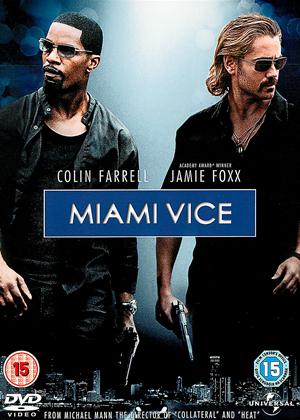 I've never watched the original series of miami vice, but if it was as good as this movie version, then I missed out.

Excellent all round film :-)

What a waste of time!! - Miami Vice review by CP Customer

This film was one of the worst 'action' films I have seen in a long time. The dialogue was dire and mumbledby the the actors almost as if they were embarassed by the lines. We managed to watch about 40 minutes and then turned it off.

What a load of rubbish, if you have anything better to do with your time like watch paint dry DO IT.

Better of getter the original series out !!

This film was so awful I had to leave the sofa and go and do the washing up to wake myself up. The characters were one dimensional - you didn't care what happened to them making following the plot even less interesting than it was already. I spent the first 10 minutes trying to work out whether it was set in he 80's or Colin Farrell's character was some kind of mullet lovin, polyester suited, handled barred freak and I'm sorry to say the latter. A shocking addition to Jamie Fox's resume - pretty standard for Colin's!

The Voice of Miami? - Miami Vice review by CP Customer

This may have been the best plot and screenplay of the year; I wouldn't know as the dialogue was inaudible, rendering the plot impenetrable.

I cannot believe the drug lord didn't spot them as cops and shoot them the moment Jamie Foxx said 'If you didn't do time with me, you don't do crime with me'. Though the thing I really can't believe is that no one shot Colin Farrell just for this Lion-King-audition hair.

Not half as bad as the critics claimed when it was released. Complex, intelligent and compulsive 'cops under cover' story - lots of twists and turns with great set peices and fantastic cinematogaphy (the real star of the film is Miami filmed at night). There are just 2 problems with the film. Firstly the three lead actors are poor - or in the case of Jamie Fox just too insignificant. Second the sound is terrible. It's really hard to hear what is being said - especially by Colin Farrell - I even had to turn on the English sub titles (even then I couldn't understand the slang!) Expect to work hard with this film and at times not understand what is going on - this is no 'Heat' but worth seeing nonetheless.

Very disappointed. I used to love the Miami Vice series but this is nowhere near it! Firstly the entire film seems to revolve around 1 drugs deal, with no real twists and turns. I actually fell asleep for a while in the middle as I found it so boring. Another reason for my dislike is that the use of slang makes it difficult to understand what is going on, as does the poor sound quality. Not one of Michael Mann's best films.

What a movie! - Miami Vice review by CP Customer

I used to watch Miami Vice series when it was on the telly. It was fun and adventerous. I was expecting to take the same excitement from the movie. However, the movie was boring and plot was awful. Not recommended.