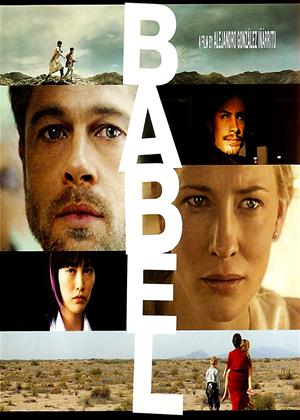 Behind the babble - Babel review by CP Customer

They say that only 20% of human communication is verbal. In this masterful work, language only serves to clutter and confuse as three loosely interlocking stories unfold across three different continents. Moments of connection take place only when language ceases, whilst the babble of different tongues and cultures serve only to reinforce separation.

This is film making at its most evocative and provoking. Beautiful cinematography frames a highly intelligent script, a beautiful score and powerful understated performances from A-listers and unknowns alike.

Do yourself a favor and rent this.

A truly impressive film - Babel review by Tim from London

A hugely impressive film which is on a much larger scale than the director's last 2 films - unlike Amores Perros which looks at life in Mexico and 21 Gramms which looks at American sub culture - this film spans three continents and several languages (hence the title). It superfically tells the story of an American tourist who is accidently shot in Morocco and the various people's lives who are affected and implicated by this - but it's really about people trying to communicate with each other across different cultures and communities, and the problems that people face communicating with each other. A wonderful and gripping film with lots of cross cutting storylines and sharp editing - ala Magnolia or Robert Altman - and a genuinely touching ending. A great film by a great modern director.

A superb film with outstanding performances from everyone involved. The film is powerful, emotional and harrowing at times, but also shows some hope. Brad Pitt and Cate Blanchett are tourists in Morocco who are having problems with their marriage when she gets shot in a freak accident by mountain children. Back in USA, their children are being cared for by the Mexican nanny who introduces them to the culture shock of her son's wedding in Mexico. A third story revolves around a profoundly deaf Japanese teenager who is desparate for a normal life but can't seem to communicate with those around her. The way the film moves between the stories and links them together is brilliant and sometimes shocking. A highly recommended piece of cinema.

All the plots, and there are many, which are played out not quite synchronously are connected but often only just. This degree of multiplicity is very engaging and invites comparison. The plots are very different almost opposite. The frustrations of a deaf Japanese adolecent, the dull incestuous life of a Moroccan goatherd boy, an illegal immigrant Mexican nanny trying to attend her son's wedding, two Americans trying to patch up a marriage by touring Morocco and a desperately poor Moroccan family helping the pretty demanding Americans, one of whom speaks no English. I would contest that there are several other smaller sub-plots. In any event the most compelling comparison is language or lack of it.

The most compelling reason for watching this is not just Brad and Kate who are good but truly amazing performances by the Japanese and Moroccan actors/actresses. I was greatly impressed and, in no little way, moved. The best director award was well deserved.

The reviews above are helpful and accurate, but before you rush to rent, consider this. It is in my view a great film, beautifully shot, but not a happy film. The three stories are linked, but more importantly they have a common theme. It is not just pain, more about communication and the lack of it in some relationships. About misunderstanding. About how stuff happens and things go wrong, unintentionally. Hence the title. The editing is clever, but it can be annoying, as it jumps from one story to another. But stick with it and you will be rewarded. I have watched this film three times now. The first at the cinema. And now on Blu-Ray, which is excellent. The photography and shots of real life in each location are worth it alone. But the story is of people, family and children. Life is not a Hollywood romance. It is how we deal with challenges and have to accept the consequences of other people's actions. I have watched a lot of films over the years. This stands out as something different. A film you will remember, but may not love?

The best of the director's films with fragmented narratives demonstrating the interdependence of things. A gunshot in the North Africa has repercussions for ordinary people across the world. Inarritu shows us world where everyone tries to communicate, but no one is listening.

A powerful, intriguing and cleverly constructed drama with three interlocking stories. It's basically a cause & effect narrative that weaves a connection that stems from a moment of childish stupidity by two Moroccan goatherd brothers which affects married couple Richard (Brad Pitt) and Susan (Cate Blanchett) who are holidaying in Morocco, their two children and their Mexican nanny in the USA and a deaf Japanese teenager grieving over the death of her mother. The film has strong themes around human nature and communication focusing on relationships, love and sadness. There are some traumatic events in the film as the initial incident ripples outwards causing events that change peoples lives across the world. It's a remarkably intricate and compelling set of stories, well written and directed with some very original camerawork and with a structure that creates a mystery vibe at times. For first time viewers of this film it's a treat as the various scenarios gradually align together. Starkly realistic this is a drama that will draw you in and occasionally have you feeling on the edge of your seat so it's well worth checking out if you haven't seen it.