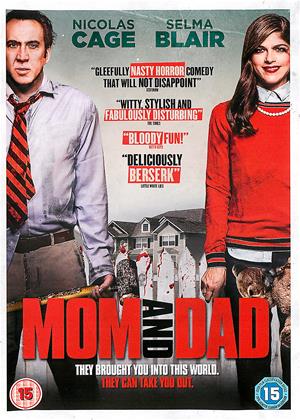 Almost but not quite - Mom and Dad review by SL

The central premise of this - parents turn on their children - could have been interesting, but the opportunity is wasted here. All we get is an hour or so of very generic slasher type stuff. There are no shocks, there is no originality, and to be frank, there's nothing here to hold the interest. Not even Cage can rescue this one.

I’m with the parents - Mom and Dad review by rm

Nicholas Cage is good, doesn't quite go crazy enough for my liking but hey you can't have everything. A good fun film, most of the violence happens off camera and isn't very graphic which fits the film well.

There is also an appearance by Lance Henriksen, if you don't know who he is it doesn't matter if you do he makes a welcome addition to this movie.

Get the beer and snacks, put your feet up and enjoy.

Kind Of Anti-parenting - Mom and Dad review by porky

We Don't really discover WHY This happens but it is rather Fun all the same.

Violent and Aggressive Feelings Overtake All Parents to Kill Their Own Children ,and Only Their Own.

Not material for Fun and Laughter ,but when the Grandparents arrive to Kill the Parents trying to Kill their Kids it gets Darkly Funny.

Gross Out as the Effects are ,The Grandparents scene was Hysterically Funny and I laughed Out Loud as Grandma flew past the window .

In a very camp schlocky way Mom and Dad poses an interesting question. What if the unconditional love of your parents turns into unconditional murderous hatred? Where do children run to when there are huge problems? Home, their parents. Where is the deadliest danger in Mom and Dad? Home, their parents. It is a great premise and makes for something a little different for the fan of horror films.

The set-up is simple, something happens, and your parents want to kill you. The main characters have no idea, firstly, that this is happening, and secondly, why it is happening. In many ways we are in zombie apocalypse territory here. The main protagonist is menaced by the average, the normal, that in any other circumstance you would never expect to be a danger.

As the viewer we are never really told why this is happening but if you watch the action and how things pan out there are clues. The feelings of approaching dread, very much like the beginnings of a deadly pandemic of the undead film, are filmed beautifully and normal life slowly has the bizarre and horrific dripped into the mundane motions of life. The news item seen at the start of the film, parents glassy eyed at the school, we know what is going to happen but Carly, her friend and their friends do not. Children are called out of class one by one to the office. Parents stand menacingly outside the examination hall, nothing graphic happens, but peril is palpable.

The culmination of the school scenes is both blackly funny and horrifying simultaneously. From this point the film shifts to an Assault on Precinct 13 style. A completely different style of film but these gear changes are smooth enough for it to be barely noticeable. To my mind, putting aside the mad, horror and silliness of the film, there is a skilled filmmaker at work here.

Although when you see the cast, you expect to see Nicolas Cage in full on ‘Nic Cage’ mode I would argue that here he is playing this film with a straight bat mostly, he is the normal dad, maybe writ large when it comes to how he talks to his son, but he must be loopy for a great part of the film and he is suitable loopy. It must be remembered the victims of the mystery illness/plague are maddened, driven insane by the hatred, jealousy, for their offspring. Selma Blair is the perfect foil more stiletto to Cage’s sledgehammer. Blair here as a ‘mum’ and playing her age, looked the part perfectly and is probably the sort of friends’ mum you fancied as a teenager. Frustrated to sadness and anger by the youth that slipped away and then is kept away by younger women.

The younger actors acquit themselves well, facing off against two of the industry's better and more respected actors, on their day at least, and the supporting cast slot in perfectly being more cameos to the film's main five characters but also seemingly fleshed out – it is good stuff. Even Lance Henriksen turns up for an ‘oh yeah that is going to happen’ moment.

The dark theme of lost youth, the end of life for parents runs through the film like the wording in a stick of rock. I found it fascinating and one that most of us ‘oldies’ can relate to. The loss of youth, that youth being wasted on the young, the huge battleship chain hanging around your shoulders that bringing up children can bring, the crushing weight of responsibility and being sensible seemingly replacing your exuberance, fun, spontaneity. We all know whose fault that is.

Okay that is extreme and is balanced out by all the love, fulfillment and fun that the same situation brings, but the makers are not looking at balance, they are looking at an extreme and what happened if it tips over.