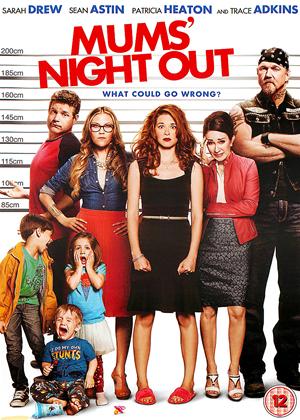 Reviews (1) of Mums' Night Out

first time ive seen this film i booked it out as it looked a fun for all the family dvd and i have to say it was defently a great movie highley recommeded :)

When I first heard the name ‘Mums' Night Out’, I feared it would be like Bridesmaids (2011) or The Hangover series (2009-2013), which are definitely not my type of movie. It only took watching the trailer to realise how wrong I was. This film has entertaining actors, comedy, and heart – which all adds up to a must-see family film.

Every mother, no matter where they are in the world, knows how amazing it is to be a mother. They also know how tiring and stressful it is. Allyson (Sarah Drew) is a mother of three, who gathers her two best friends, Izzy (Andrea Logan White) and Sondra (Patricia Heaton), and goes on a mums’ night out. Things go from bad to worse when a child is lost and the group search all over the city, getting into one adventure after another. This film is not about useless fathers or tired mothers, but about individual accountability and learning that no one is perfect.

No one is going to deny that the story of a stressed-out mother who needs to compensate for her unreliable husband is not a new idea. Of course it has been done before, but it is the ways in which this film makes it feel fresh and new that keep you watching.

The actors are not A-Listers like seen in Valentine’s Day (2010) or New Year’s Eve (2011), but they are ones that we love to watch and that know how to entertain an audience. Personally, my favourite is Patricia Heaton, who has definitely found her niche. She is best known for her role as Ray Romano’s wife in Everybody Loves Raymond (1996-2005), and has expertly taken on the lead role in the show The Middle (2009-). All of the actors showed how much they understood the characters and the genre, with many of the original lines being thrown-out and improvised by the actors – which even the writer loved!

Mums' Night Out has been promoted as a ‘Christian-based comedy film’, and while that may turn some away, it made me more inclined to see it. It is proof that movies don’t need to be riddled with curse words and sex scenes to be entertaining.

Overall, this film has received generally unfavourable reviews. Comments on YouTube and reviews on online critic websites like Rotten Tomatoes, among other complaints, have labelled this movie ‘sexist’. This is so far from the truth that one questions whether they actually saw the movie. Upon watching the film, you will see that it is more about empowering women to understand that no one is perfect, and they aren’t expected to be. Yes, the men do sometimes behave in silly ways in the film, but so do the women.

Harsh online critics might be looking for something different (curse words, sex scenes, etc.) or they might just be reading a little too much into a fun story that has received a largely positive response from cinemagoers. Sometimes you have to ignore the critics and just watch the movie and see for yourself.