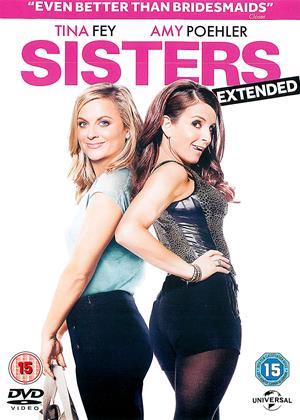 So bad, we only viewed about 15 minutes of it and gave up in disgust. Hardly anything like a broad 'feel good' comedy, as it has been advertised (a 'very silly comedy' might be a better description!!

This is a one-joke comedy. The joke is that two sisters in (presumably) their late 30s/early 40s (one of them has a grown-up daughter) give a teen-style party. And that's pretty much it. There's a sub-plot involving their parents (James Brolin and the faintly irritating whispering-and-squinting Dianne Wiest) and their childhood home and a love interest on the horizon, plus the usual little lectures about family relationships.

The assumption is obviously that the undeniable comic talents of Tina Fey and Amy Poehler will carry the day. It doesn't work. Fey's character is strident and slightly aggressive and the "petulant child grown up" schtick is irritating rather than touching. Poehler is a bit more likeable, but you can hear the writers trying to make her adorably-but-misguidedly caring. There is simply too much of the two of them. No two actors are good enough to carry every single scene of a movie unless the writing is exceptional; here, it's just not.

I started scene-skipping well before the end, in the hope that there would be more to this movie. Nope. Wish I hadn't bothered with it.

Sisters answers the question if two women in their forties have outgrown their youthful teenage ways. Rather than contemplate their past and how they should react in the present, these women give a big middle finger to being an adult as they celebrate with a house party. Beers in hand, puke on floors and cheering loudly, they are not bound by age in how they still have enough kick in them to throw the rowdiest of parties. They might not have outgrown their party lifestyle, but I’ve certainly outgrown the comedy of the house party movie template.

Tina Fey and Amy Poehler play Kate and Mara, two sisters who return to their childhood home to find their parents are selling it. Rather than clean out their rooms before it is sold, they gush and swoon over their nostalgic items of their younger years. They slap up their Xanadu poster, turn on their cassette player and read from their diaries. A treasure trove of 1980’s nostalgia, I’m surprised the parents didn’t just clear out this room considering how low an opinion they have of them. Pining for the old days, the two decide to throw a big house party as a grand sendoff. This is not a simple gathering of wine and laughs, but a full-blown party of booze, sex and destruction of property. No teenagers at this shindig as only people in their 30’s and 40’s are allowed.

If this sounds familiar, it’s because Sisters is a nasty little concoction of mixing the wacky antics of the House Party series, the manchild nature of Step Brothers and the female edge of its lead protagonists. Even on the level of a goofy comedy, Sisters fails to impress with how desperately it wants to be vulgar. Shooting hard for that R-rating, characters will constantly be bickering to the point of violence, spouting vulgarities or wedging foreign objects into anuses. All of these bits are delivered in the most scattershot and random of methods. Many of the gags appear rather lazy in their conception. Is it really that funny somebody drew a poorly-sketched penis on the wall? Am I supposed to laugh that Fey milks the visual for about all the lame jokes you can make with it?

I’m sure there may be a few women who read this review and balk that I would never say such things if a male were in this type of movie. Allow me to make my stance perfectly clear. I didn’t like this plot when it was repeated in House Party. I didn’t find the overgrown child comedy funny in Step Brothers. And I’m completely turned off by the whole wild frat party movie from the forgettable Project X, what should arguably have been the final nail in the coffin of this subgenre. Fey and Poehler seem to be proposing that they’re not too old to party it up on screen, but they’re choosing to do so from an old story format in a script that showcases their age more than anything.

The picture is entirely dependent on the talents of Fey and Poehler to carry what is essentially a smattering of bad college jokes written for 40-year-olds. They have genuine chemistry and a certain family dynamics that plays well when present, but their stammering improv and physical acts of vulgar comedy leave much to be desired. Based on the content and the R-rating, I’m guessing this was their attempt at launching themselves into the raunchy playground of female comedy setup by Paul Feig. But Paul Feig’s pictures (Bridesmaids, The Heat, Spy) had comedy that was smart and worthy of all the puke, blood and cursing splattered on screen. Sisters doesn’t want to build real characters or stories that make you care about what transpires - it just wants to get to the easy laughs as fast as possible. At one point we get to see an extended sequence of an unlucky guest trying to remove a swiveling musical figurine from his butt. Bridesmaids this is not.