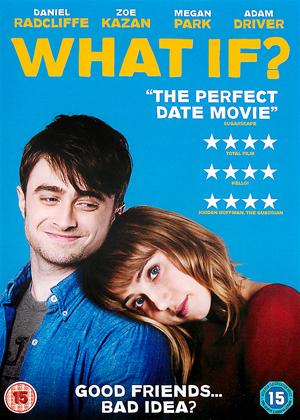 Bit boring - What If? review by HD

There are a lot better films out there telling the same story and this one has nothing to really recommend itself. I don't think the film knows what it's trying to be, it's not funny, not at all romantic and I don't think it really does pose any questions about whether men and women can really be "just friends". Even When Harry Met Sally did that better.

I suppose I would have to admit that the acting was good, but there was no spark whatsoever between the main characters and you got no sense of their friendship developing over time until they realise they are in love. Radcliffe's character has been in love (or lust) since the beginning and just hangs out basically until it is returned.

ok watch the once for me - What If? review by gazmb

The usual love story about the male and female main characters being just best friends that start to have more than just feelings of friends . There doesn't seem to be much of a natural spark between the two really. I enjoyed watching this once but probably will forget about it in few weeks.

Better than people give it credit for - What If? review by MD

Yes, it's easy to dismiss this as another lightweight rom-com about the eternal question, "Can a man and a woman be just friends?", but seeing it for the second time after a break of several years I actually thought it was rather better than many similar films.

When the story is not very original, you need a good script, good acting and imaginative direction to make a movie work, and this certainly has the first two, if a bit lacking in the third. I read that it's not funny or not romantic, but I beg to differ - much of the dialogue is very sharp and witty, especially from Adam Driver's character, and there are plenty of situations that most of us will recognise showing the twists and turns of attraction. Zoe Kazan is a very underrated actress, and Daniel Radcliffe does a great job of throwing off his Harry Potter image, so even if, as some suggest, the chemistry is not quite there, I think they portray a much more believable pair than you find in most rom-coms.

Bottom line is, sure, this is not an unforgettable piece of cinema, but it's still definitely worth a viewing. I enjoyed it a lot.

What If? (aka The F Word) review by Michelle Sommerville - Cinema Paradiso

Can men and women be friends? According to the 2013 film What If (also released as The F Word), no, and yes...but ultimately no. The film runs for just under two hours, and though there are positives like acting and dialogue, it is essentially nothing we haven’t seen before.

The film follows Wallace (played by Daniel Radcliffe). Wallace is a medical school drop-out, with shocking luck when it comes to relationships. All of his friends have found their perfect matches, so Wallace decides to give up. It is only when he stops looking for his soulmate, that he finds Chantry (Zoe Kazan). The problem is that she is already in a long term relationship. The two strike up a friendship, but are they destined to remain besties, or is this just the start of something more?

Let me begin by saying that I am so sick of the term ‘friend-zoning’. I am a female and I have male friends. I did not trick them by leading them on, nor do I turn to them for a relationship when others fail. They are no different to my female friends. They are just friends. That is what bugs me about this film. Yes, it does show that there are other types of relationships, but it also undermines it at every step. It falls into becoming a cliche romantic comedy, and it does not bring anything new to the genre.

I was not totally sold on the characters. Some were more likeable than others, but more than anything it just reminded me how thankful I am that I do not hang out with these people and nor do I ever want to.

For those in the audience under 30 years old, you are sure to recognise the one and only Harry Potter (also known to his parents as Daniel Radcliffe). Since the end of the Harry Potter series, Radcliffe has been very busy taking on one role after another, with each a totally different character. He was the only member of the cast that I knew, but the others did just as good.

The dialogue was well done. It was witty, it was smart, and it was indicative of the generation. I don’t know the age of the writer of the screenplay (which was based on a play) but their dialogue was clever, funny, and representative of the Generation X demographic.

For the most part, What If has been quite popular with critics and audiences. It has received predominately positive reviews, with the only criticisms in regards to cliche and its slow-moving pace.

For those from twenty to thirty years old, this is a film for you. Some of the content makes it unsuitable for younger audiences, and older generations probably won’t be interested. At the end of the day, What If is a rather generic Rom-Com, but with some interesting characters.