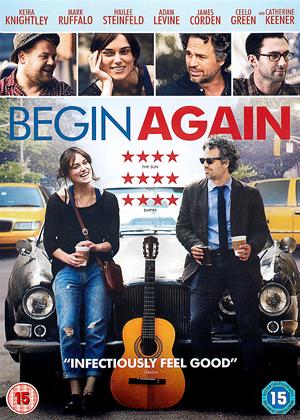 Really enjoyed this and it was a delight to hear Kera Knightly sing. A small voice but quite lovely.

Nothing particularly original in the story of songwriter trying to make good but this is most enjoyable from start to finish.

A wonderful scene when a recording of a really catchy song is made "alfresco" on the roof of a building. Shades of the Beatles.

I wasn't actually expecting to receive this film, as I couldn't remember selecting it (which of course I did), but I'm glad I did.

I'm not normally a huge fan of Kiera Knightley but I enjoyed her performance in the film. It's a story, which as another reviewer mentions is one that has been done before. A songwriter trying to make her mark and gain success in a tough and competitive smaller scale musical environment. Think smaller gigs in bars and clubs. She sets about trying to record an album and meets Mark Ruffalo who takes us on a journey, of recording the album in unusual settings.

Mark Ruffalo is great, as usual and you very quickly warm to his character and his positive attitude. A well crafted film, with some great settings, a loveable cast and very uplifting. As I said, not the sort of film I would usually select, however having done that I found a film that I enjoyed and finished feeling very good about what I had just watched.

A chance meeting between a hard up and heartbroken producer Dan ,(,Ruffalo) , and an equally heartbroken singer songwriter Greta (Knightley), sets in motion a partnership. The two collaborate to make an album on a shoestring, foregoing studio recording for recording on the streets of New York in different settings. Along the way their perspective fractured relationships are dealt with.

A very enjoyable film that is thoroughly well acted by the two main actors who have terrific chemistry. Thoroughly recommend this feel good film.

New York is a magical place to visit, its lively, its bustling and it houses some fantastic sights and sounds (and even smells). New York for a struggling artist however is an entirely different story as the many songs speaking of depression and hatred can attest to. Begin Again tells the story of the sad and disenfranchised living in the city but not for a second do you find yourself pitying them.

Begin Again follows Dan (Mark Ruffalo), a down on his luck record executive who has been on a downward spiral for the last few years with no hit artists and a failing marriage. However one night he hears a song by Gretta (Keira Knightley) and is so blown away that he finds a passion for music he thought he had lost. The two bond over their joint love of music as Gretta tries to get over her devastating breakup with rockstar Dave (Adam Levine) and handle living alone in the city.

The only real problem with Begin Again is the fact it takes almost forty minutes to get started, it spends almost the entire first half providing plot heavy backstory about Dan and Gretta and what brings about their meet cute. While none of it is bad as it develops Dan into an unlikely hero despite his many (and I mean many) flaws. The moments that set up Gretta however almost make her pitiful if it weren’t for some sublime acting by Knightley who has been on a roll lately moving from one great character to another.

Aside that small qualm Begin Again is a heartwarming and light drama film that really gets into the minds of the people that make the music business work, the people with the kind of passion to their craft that has brought about great artists. From Once director John Carney, Begin Again once again reaches your soul with some beautiful original music that accompanies a story that is easy to relate to and will make you fall in love with New York City without ever having been there.