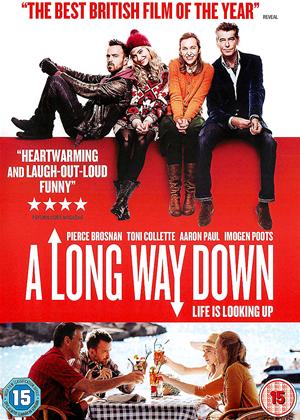 Reviews (2) of A Long Way Down

A very twee and stagey conceit, laced with psychobabble and moral lessons - A Long Way Down review by PV

I found this film somewhat irritating. I think it was because of the stagey concept - as a play in the theatre this would probably work better.

I was also more than irritated by some of the characters - and was egging them on to jump off that very high building!

The emotional manipulation by Hornby in his original story is shameless, and the tabloid plot silly. But a wafer-thin story needed some sort of plot, structure and direction - though these things, like the holiday, feel tagged on. As does the ending.

It would have been 1.5 stars were it not for the good performances by the actors, especially Pierce Brosnan.

terrible and disappointing.... - A Long Way Down review by NH

From breaking bad to this ? He really has fallen a long long way down hasnt he ?....wooden acting ('toni collette why?) unbelivable narrative ridiculous plot turns....i hope they were at least paid well...

and the teenage actress at the beginning ? Id ve pushed her off the ledge not saved her...

A Long Way Down review by George Hooper - Cinema Paradiso

If there is anyone who can craft a funny and touching portrayal of desperation it would be Nick Hornby who somehow managed to make an unpleasant philanderer lovable in his much loved adaptation of About a Boy and while A Long Way Down handles its premise with sensitivity it can be said that it plays it a little too safe making its characters seem more melodramatic than actually depressed, which oddly enough does more harm to the film then an offensive stance would have.

The film follows Martin Sharp (Pierce Brosnan), a TV personality who thanks to a mistake has lost everything, his job, his family and his reputation. When he decides to finish it on New Years Eve he finds his moment of loneliness interrupted by three other like minded souls. Martin is joined by party girl Jess (Imogen Poots), rocker JJ (Aaron Paul) and introverted Maureen (Toni Collette) and together they make a pact to live on until Valentines Day and try to make something better of the lives they currently lead.

While the film tries very hard to make each characters struggles seem original and believable there is plenty of sensationalization going on here with each character receiving his own personally tailored sob story designed to make the audience pity the characters instead of like them and while Brosnan and Collette make their characters problems seem more than they are on the page, Paul and Poots never really get the right balance of comedy and tragedy to make JJ and Jess seem like normal human characters.

In the end though, A Long Way Down is a smartly written comedy that avoids glorifying the suicides these characters are contemplating. The ending might be a little sappy and the film seems to lose its muster towards the end as Jess becomes a completely different character and JJ’s issues are swept under the rug with little mention of them but this is an entertaining picture that while having its own flaws does prove to be an awful lot of fun.