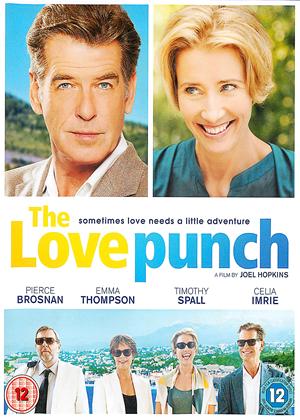 Reviews (3) of The Love Punch

A lighthearted comedy which has it's moments of laughter and emotion.

The cast pull the film from the depths of the bargain basement bin up to something watchable.

The 4 talented stars of the film use all of their skill and know how to create moments of comedy, passion, and emotion worthy of a better film.

I didn't expect much from this light-hearted silly romcom and I wasn't disappointed.

It's all very silly - like a B movie Pink Panther.

Absurd plot - but then it's the romance from the leads which will get those older female viewers loving this.

I didn't love it. The movie was yawn-inducing and thankfully short.

The only reason it's not 1 star is because I laughed at a couple of the lines (though Emma Thompson's praise for France's social serices made me snort!).

All so twee and middle class. Ridiculous, like something invented by a 14 year old - about a stolen diamond, a sort of princess, a hedge fund banker, and a pension plan plundered.

One star I am afraid - The Love Punch review by RT

Despite a stellar cast (I can only assume that Spall, Thompson and Brosnan needed some pocket money for their summer holidays) this neither held my attention or amused) - even if there were a few laughs. There are better ways to spend an evening (and leaving the television off would be a good start).

The idea of a romantic comedy with Pierce Brosnan and Emma Thompson sounded excellent to me as I know Thompson has previous experience with excellent romances such as Love Actually and Last Chance Harvey. Both of those films were great on their own but Thompson elevated the material into something more. The Love Punch never puts her talents to use and oddly enough its sardonic Brosnan that comes out on top in this pathetically average picture.

The Love Punch follows divorced couple Kate (Thompson) and Richard (Brosnan), two people who thought that their lives had moved off in separate directions after their divorce but find themselves brought back into each others orbits when their joint retirement fund is stolen by a disreputable group and they find themselves trying to figure out how to get it back with the help of a few friends. However this exercise in major crime leads to some unexpected feelings returning to add mayhem to their plan.

While the premise provides a few comedic moments akin to Dirty Rotten Scoundrels as these bumbling brits try their best to do things they have never even contemplated before the whole film is a desperate creation, the jokes are stale (especially one near the end about sandwiches ironically enough) and there is rarely a moment that hasn’t been painfully played out for all the sap it has to offer. Although Thompson and Brosnan are great performers there is little real acting required due to a script that lacks the emotional depth to even pull off character.

Sure the music is enjoyable and the supporting cast provide a sense of humour that the leads seem to lack in the films early moments (Timothy Spall makes the beginning almost enjoyable) but the film falls flat on its face when the preposterous heist plot comes into effect and what should be a fun little caper feels overburdened by poorly strung together romantic moments that feel so forced you can’t quite buy why they got married in the first place, let alone why the decided to rekindle whatever it is they have.