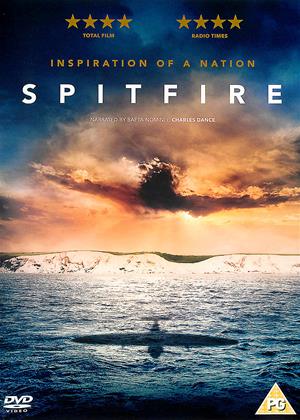 Synopsis:
"Spitfire" is an epic, sweeping tale of determination, vision, and courage. It is the story of an aircraft that was forged in competition, shaped as the war clouds gathered, and refined in the white heat of combat. Credited with changing the course of world history, this is the story of the Spitfire told in the words of the last-surviving combat veterans, with stunning aerial footage from the world's top aviation photographer. Her place in history assured, Spitfire also explores how this extraordinary plane thrives today and how it has become an international icon.
Actors:
Mary Ellis, Geoffrey Wellum
Directors:
David Fairhead, Ant Palmer
Producers:
John Dibbs, Gareth Dodds, David Fairhead, Steve Milne, Ant Palmer
Narrated By:
Charles Dance
Studio:
Altitude
Genres:
British Films, Documentary, Special Interest
Countries:
UK

This was just great!! told by the guys and girls who flew and helped them fly,it does'n't get bogged down with historical facts.Worth watching for sure

Tally Ho, Chocks Away, Let's Give Those Germans a Ruddy Good Fight! - Spitfire review by BS

You get to see the various iterations of the legendary aircraft as it progresses through the war. Accompanied by an inspired soundtrack, some great aerial photography, war footage and interviews with former pilots and people involved in its development. Amazing how technology improves so much when there's a serious need. Almost two centuries with trains however and they we'd be lucky to see one pull away from the station in the UK, what with all the leaves on the line and signalling failures. Why can't we all have a modern mini-spitfire to commute to work in?

I had rented this for my husband who is v interested in the history of the Spitfire. We started watching & I was spellbound. There are fascinating and poignant interviews with the surviving fighter pilots as well as two of the women who ferried the planes. One woman was 101 when interviewed. She got to see the last Spitfire she had delivered. There are film clips, both British and German of arial combat. There are scenes of arial manoeuvres that are like watching a gymnast suspended in time. I gasped. The special features are as good as the movie, showing how the documentary was made. I watched Spitfire twice and highly recommend it.

A beautifully shot and well-constructed documentary on the origins, action and mythology of the iconic aeroplane. Lots of archive footage, modern flying Spitfires and Hurricanes, and interviews with ex-pilots and Wrens. There was more than one moment when I developed a strange patriotic lump in my throat! This film does suffer slightly from the modern documentarian's obsession with background music, but it's not as bad as most.

Incidentally one of the Battle of Britain veterans they interview is the late Geoffrey Wellum, who wrote a really compelling memoir of his experiences training and fighting in the RAF. Well worth a read for a deeper insight.