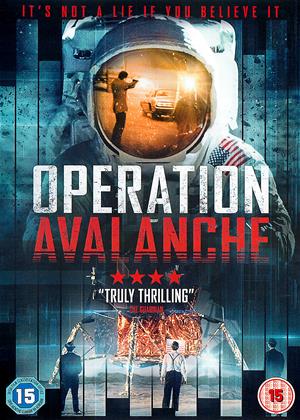 couldn't get into it at all - Operation Avalanche review by gazmb

I just couldn't get into this film at all. Didn't think it was well made at all . Gettting really fed up of these films trying to be documentaries .

The plot is that two young guys from the CIA manage to be posted to NASA in order to find a suspected Russian mole. They manage to do this by pretending to be a documentary film crew. So far so good, the plot has possibilities.

Unfortunately to add realism, the whole film is shot to look like it was done by the lead actors on a 1960s Super 8 movie camera, and just to emphasise this point, the camera is waved around a lot, is out of focus, often pointed at lights and has terrible grain and very washed out colours.

If they had stuck to this for the first five minutes perhaps and then faded to proper cinematography, the film may have survived to be watchable in its entirety, however the excessively jerky scenes caused feelings of nausea in both of us, and we aborted the film after 15-20 minutes in order to recover. We couldn't face going back to it so cannot comment on the remainder of the film.

The amateur film making aspect was reinforced by the very hammy acting of the leads, supposedly to add to the plot but was nothing more than extremely embarassing.

Operation Avalanche works on so many different levels, and falters on so many others that it’s almost impossible to discern a credible score for director Matt Johnson’s second faux documentary product. Things that work: the film comes off as extremely creative in its filming, editing and (re)telling of a story covered up neck-high in conspiracy juice. Things that don’t: awkward pacing, uncalled twists and heck of a confusing story. Then again, its originality and creativity, or moreover – an honest attempt at succeeding at one, makes Operation Avalanche worthy of one’s time regardless if one is fond of matters such as Fake Moon Landings, undercover KGB agents and double indemnity CIA espionage.

Operation Avalanche opens rather slowly, establishing plot ties that would later prove useful on the behalf of the characters, who at first, have no clue what’s going on. Soon, Matt Johnson (playing an alternate version of himself, a journalist), during the historical peak of USA’a determination to send men on the Moon, develops a peculiar idea to disguise his team as documentary filmmakers in order to enter NASA’s facilities under CIA’s tutelage. Why all this trouble? Well, Matt (via CIA sources) is convinced that a Russian mole exists in the USA’s aerospace headquarters, who wants to steal their plans of setting foot on the Moon and deliver them to Kremlin itself.

So, in a way, Matt Johnson and his friend filmmaker (in real life and otherwise) Owen Williams play real crew that poses as fake crew within a fake film regarding a conspiracy theory that may or may not have been disproved. Let’s try that again. Matt and Owen are real filmmakers, who play real filmmakers posing as fake filmmakers in order to catch the Russian mole in NASA.

Afterwards, in a twist that I won’t dare to reveal, Matt and friends are met with multiple nested instances where reality around them changes. What is imaginary, and what is real? Who claimed to be a spy, and who ended being a double agent? And how does Stanley Kubrick fit into all of this Shakespearean mess?

Some of the raised questions are answered, but are done so in a way that’s both unbelievable and a little forced. The story gets lost into an otherwise fine build up before the big reveal takes place.

Put that aside, and Operation Avalanche is a technical masterpiece strung together on a tight budget – even Kubrick himself to be proud of how the final product looks and feels. The transition from 8mm grainy black & white (mostly) on-screen. The sound is also on par with the visuals, while the special effects prove better than most generic action-flicks we’ve come to despise throughout the years.

For this amazing feat, director Matt Johnson and writer Josh Boles had actually convinced the real NASA that they were filming an Apollo documentary just to gain access to their facilities. Art imitates life imitates art, imitates… and so long ad infinitum.

For the sheer creative force Operation Avalanche oozes – it’s a clear 5. The story hits somewhere between 2.5 - 3.5 at most. Overall – 4 stars.