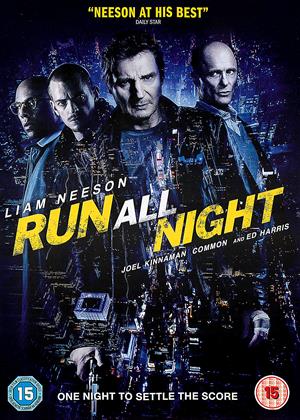 Reviews (3) of Run All Night

Will while away the time quite well, but it's not a film I would watch again - Run All Night review by RP

Liam Neeson has a distinguished acting career, probably peaking with his leading role in Steven Spielberg's 'Schindler's List' in 1993. But from 2008 onwards he has re-invented himself as a (somewhat elderly) all action hero, first with his role in 'Taken' (and a couple of sequels), 'Unknown', 'The Grey', 'Non-Stop', and 'A Walk Among the Tombstones' (I might have missed one or two - and I'm not counting the 'Batman etc' films). This latest (2015) offering 'Run All Night' is his third with director Jaume Collet-Serra, the others being 'Unknown' and 'Non-Stop'.

My problem with Liam Neeson is that, like perhaps Clint Eastwood in his day, he continues to take on 'action' roles when a little too old for the part. In 'Non-Stop' there was an effort to cover this by dating his passport 3 years younger than his real age - but in 'Run All Night' he seems to have done the sensible thing and accepted an age-appropriate role. The man is 63, after all...

Neeson plays retired mob hitman Jimmy 'Gravedigger' Conlon. His mobster boss and long-time friend Shawn Maguire is played by the always excellent Ed Harris. Conlon is estranged from his son and in a somewhat silly plot device, Conlon shoots Maguire's son - so Maguire orders his men, including an outside contract killer, to kill Conlon, his son and his son's family. There follows lots of gun violence and the usual car chase. Err - that's it.

The film is formulaic and full of clichés, but the pairing of Neeson with Harris works well, and Neeson's portrayal of his character as a grizzled, past-his-prime has-been on the verge of alcohol dependency is frankly far more appropriate to his age than some of his earlier efforts.

I liked the noir-ish look and feel of the film but while it has its moments, it's just too predictable. You know that our hero is going to get the better of the 'ordinary' hitmen, you know that the outside contract killer is going to be (almost) unstoppable - and you just know what the ending will be.

To be honest I'm a little disappointed, as I really liked 'A Walk Among the Tombstones'. This one isn't bad, it will while away the time quite well but it's not a film I would watch again. I'll give it 3/5 stars.

Better than you think, despite body count - Run All Night review by NC

Liam done a load of these depressing, running about with guns films, but this one a tad better than most.

Good action film, bit obviuos but if you like die hard etc it is worth a watch.

Not long after Liam Neeson was running from gangsters and cops in Taken 3, he finds himself in yet another similar scenario with Run All Night. All the expected elements from a Neeson action picture are included from shootouts to car chases to the obligatory chewing out over a cell phone. Even one of Neeson’s regular directors is at the helm, Jaume Collet-Serra (Non-Stop, Unknown). Thankfully, Collet-Serra seems to make best use of Neeson in his pictures and his latest effort is proof positive. It doesn’t tear down the Neeson action machine to put a new spin on his template, but it does slap on a fresh coat of paint and grease the wheels to deliver another pleasing effort.

The gun-toting protagonist he plays this time is far more defined than in his previous movies. His character is Jimmy Conlon, an enforcer for New York mob boss Shawn Maguire (Ed Harris). All those certain set of skills he kept bragging about in his previous pictures have depreciated with his regrets and his drinking. He shuffles about as a broken and drunken man, begging Shawn’s son Danny (Boyd Holbrook) for a loan to fix his heater. Danny forces the boozer to dance for his money by playing Santa Claus at a Christmas party where he stumbles and slurs, uttering the most sexually vulgar sentence I’ve heard out of Neeson in ever. You feel bad for the poor guy, but you can tell he has more or less put himself in these circumstances.

He deeply misses his agitated son Mike (Joel Kinnaman) who has broken contact and lives out his new life with wife and kids. But when Mike’s job as a limo driver lands him in hot water with witnessing Danny murdering some Albanians, Jimmy’s skills are required to save his son. When the arrogant Danny comes gunning for Mike, Jimmy guns down the spoiled kid in cold blood. With Shawn now sending his goons for Mike and nearly all the NYPD turned crooked to his side, it’s up to Jimmy to keep his son protected long enough to save his life and his family. Not only must Jimmy keep Mike alive, but keep his name clean by not letting him shoot a single goon, cop or contract killer.

Just watching Liam Neeson and Ed Harris go at it as hero and villain was worth the price of admission. They have a colorful past as best friends which make their rivalry all the more intriguing. Even when consumed with rage for protection of their own, they still trade pleasant stories of their better days between bullets. Neeson also gets a chance to get very physical with a contract killer played by Common. Their duels become incredibly physical and gritty to an absurd degree where at one point they are battling each other with flaming two-by-fours in a burning building. Even the dialogue between Kinnaman and Neeson is brilliantly spun as a bitterly feuding father and son. They’re very smart characters in their many scenes together. The father asks his son if he’s happy with his life. The son bites back stating that this is supposed to be the part where he says his life didn’t turn out so bad despite his dangerous dad. Neeson agrees its his lame attempt to connect, but still demands an answer.

The tension is maintained throughout thanks to some incredible cinematography. The shots transition to different parts of the city by whipping the camera out above the city, passing through gates and subways to get to the next scene. It becomes slightly overbearing and a bit of a showy element for how many times its used, but it certainly helps keep a breakneck flow to this entire movie. Many of the expected bouts and set pieces are skillfully directed to really get the viewer invested. The car chase through the crowded New York streets felt real and pulse-pounding without going so over-the-top as making a semi topple (I’m looking at you Taken 3). The evasion of thugs at the subway station is tactfully assembled with Mike cleverly ducking authorities and gangsters while trying to escape. The shootout in the woods, which the movie spoils in its opening, is just as strong with some memorable shots that include a POV from a shotgun trigger as it cocks while being spun.

Run All Night spins a crime drama strong enough to make the viewer jog along with it for all its genre cliches. A decent enough script is enhanced by the solid direction of Jaume Collet-Serra and the magnificent performances of Liam Neeson and Ed Harris. At first glance, it appears to be yet another addition to the Liam-Neeson-angry-on-a-phone collection. Despite fitting the criteria, this is one of his better efforts with stellar talent both on screen and behind the camera. It’s at least refreshing to see Neeson playing a character that isn’t just a good-natured avenger with a heart of gold, but a tortured soul trying to do just a little bit of good before kicking the bucket.