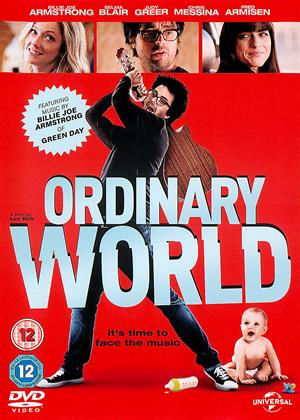 “I think I’m having a midlife crisis.”

Billie Joe Armstrong plays the character of Perry who mutters these words. And he’s right. His days of being a rebellious rocker are long behind him, going into his 40s as the dad of two kids, husband to a busy woman, and working a hardware store. He misses those days of rocking out and feels that everyone looks down on him. It’s perfectly natural to feel like crap at such an age, especially on your birthday. The only problem is that Perry doesn’t make this statement until the third act, when he has made a mess of damages and expenses in the name of lashing out.

Perry is a hard guy to like because his distancing from everyone and a desire to rock out comes hard to bear for being one crazy day of a rather ordinary life. Of course, he would choose a rocky day at work and the day of his daughter’s talent show performance to go AWOL. Desiring something more out of life, his big plan to get back into his groove is to rent the most expensive hotel room he can find and throw a massive party. There’s a moment where something could be said for this stupid act, where after he calls up all his buddies to party, most of them only go to voicemail and he’s left to himself in a room far too large, looking forlorn. A commentary on how reaching the top means nothing when you abandon all others? Nope! The old gang soon arrives and a crazy party is underway, much to the chagrin of the stern conciegre who assures Perry that any parties will cost him dearly.

I suppose that’s my biggest hang-up with Perry’s midlife crisis in that it’s never treated with a serious sense of desperation, embracing the silliness of the scenario where errors continue to mount, even when winding the story down. Of course, the day he decides to do something drastic would have to be the same day as the parents coming to take a visit, judging everything from the clothes he wears to how he takes care of his home, even giving him relationship advice. The whole comedy of this situation relies on how terrible Perry is as a communicator and getting lost in the clouds from his haze of the rocker days he wants to retrieve.

And so a slew of lukewarm gags fill up the runtime in a tired manner. The hotel room will be trashed by a violent rock band, where dogs run amok and expensive booze is guzzled. An old female friend from the past will present Perry with the option to sleep with him. But there’s an inconsistency with this party element that never feels as fully embraced, showcasing the character waffling between roles of dad and rocker. He’s willing to spend thousands of dollars on a fancy hotel and even let his buddies indulge him with a stripper but he still has a real hang-up about the stripper not using a coaster.

Watch Perry flail between worlds where it seems like he has a split personality and a conflicting attraction of reponsibility and rocking is just not as fun as the movie would want us to believe. Maybe if my youth had been spent as a troublesome musician I could relate to the frustrations of going into 40. But Ordinary World presents a rather tired and often cartoonish take on the midlife crisis, existing more as an episode of an aged rocker sitcom than an engaging comedy that carries a more relatable tone.