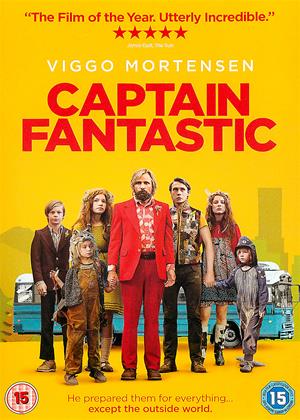 Imagine a world where The Dude did not grow up to be a ten-pin bowling obsessed hippie in the Big Lebowski, but instead sired 6 children who were home educated in in bohemian ideals using almost military work ethic, living off grid virtually cut-off from normal society. This is the starting point for Captain Fantastic with Viggo Mortensen in the lead role. Forced to leave their home after a tragedy, the film works best when it is just Viggo and the children. Together the family amplify the ideals so often shown in films (the hugely intelligent, charismatic hippy with all the answers) and the contradictory amount of work and near brainwashing used to achieve it, Where it works least when they meet other characters. These are almost invariably cartoon cut-out stereotypes, reacting in incredibly predictable ways. More depth to these encounters would have added so much more.

This is a four star film. I enjoyed it. It entertained me. It is, in part, really well acted. It wants to be better than it is, it tries incredibly hard to say more than it can; ultimately it just doesn't quite deliver. But better this film than a hollywood rom-com any night of the week.

A real treat! Captain Fantastic presents an alternative to the typical american family comedy, a family living off the grid and faced with all the struggles you would expect live in such a place - really enjoyable from start to finish.

Makes you question your own way of living.

Not Quite What I expected - Captain Fantastic review by Cato

I was rather looking forward to this film - the title looked like it was going to be a couple of hours of fun. No such thing. In fact it turned out to be anything but. The story involved a domineering father who wanted to make all of his children do everything he thought they should in his alternative quasi hippy way of living. Of course it didn't work, but I won't go any further, as it might spoil things

A refreshingly different movie from actor/director, Matt Ross. It is about a family who have been living a bohemian lifestyle out in the wilds and is very well acted, especially by the six children with not a precocious one amongst them. George MacKay gives an outstanding performance as Bodevan and the movie is thoroughly entertaining all the way through. Beware - the consumption of food whilst watching the first ten minutes is definitely not recommended!!

Writer/director Matt Ross doesn’t put a foot wrong in this absorbing tale of a man bringing up his children in the backwoods as personable and literate. Every barb directed at the establishment and consumerist society hits home, from governmental failings to obesity and processed food. But the kids are also socially inept, and the film doesn’t shrink from portraying that.

It’s a wonderful film to watch, never flagging for a second and constantly entertaining and surprising. With the picturesque sheen of an escapist hippy fantasy, it both tugs at the heart and makes you think, which is no mean feat. The performances, including those of the six children, are flawless and there are some great dialogue exchanges. A sure-fire winner.

Grizzly beginning which might put off faint hearted but stay with it this is an uplifting feel good movie. The film does exactly what the main character sets out to achieve with his children, it brings up difficult topics and discusses them frankly and in places is an absolute romp and completely accessible.

Another fairly average product of the American ‘family’ road movie genre. A family living off-grid in the backwoods are under the care of their father whose character is a bizarre mix of Rambo and a guitar strumming hippy. The family, a mixture of boys and girls; all ages, have to leave their animal skinning antics to head off for the funeral of their ‘missing’ mother. Melodrama ensues as the family have to face the reality of the other America; junk food, sassy girls and the very conservative family of Dad’s in-laws who really don’t like his style of child rearing. One example of Dad’s style is to hand out presents of enormous deadly hunting knives to all the kids during a sort of alternative pseudo Christmas dedicated to Noam Chomsky (not too sure how N.C. regarded being tagged to this movie!). There are some similarities to other movies of this type; Nation Lampoon’s Vacation and Little Miss Sunshine, although they are lighter in tone (I do wonder about the American road movie nonchalance when dealing with corpses. I would imagine that spontaneously absconding with, and transporting a corpse in the family wagon would, in most countries, see one up in Court). Anyway, to lighten things up and offering cringe moments (imho), there is some very syrupy singing by the family.

I loved this film! Viggo is brilliant as a bereaved dad trying to raise his brood in the mountains away from the lunacy of the modern world. I am not a parent but it says so much about raising children away from modern kids who seem to be screen obsessed and sedentary although viggo does go to extremes with them. A great film with a fantastic performance by viggo.