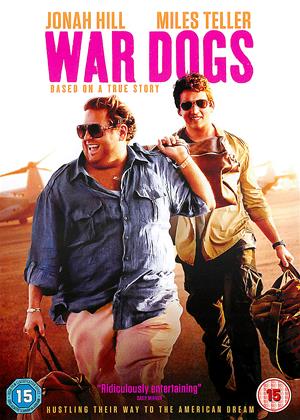 I would sau an ok watch - but if you got something else to watch don't bother.. Saying that Its my personal opinion.

Glory of war and money - War Dogs review by NC

Again the US makes a film about a pair of really nasty people in an almost endearing and comedic way. The Nicholas Cage Lord of War was a better film.............

The huge gain in illegally made money, in a very short time, over hauls everything.........same as drugs. Massive loss of life results in massive profit, so that is OK.

The fascination with crime and murder and guns cannot be stopped in the film industry. Glorification of really evil folk like Jesse James, and Billy the Kid, continues.......................

With Adam McKay delivering a peculiar and powerful portrait of the big banks scandal with The Big Short, Todd Phillips has taken the same cue as a comedy director attempting to adapt true events. He even chooses a story best suited to his “dude bro” style he honed with his trilogy of Hangover movies. How could he resist such a story when it was based on a Rolling Stone article entitled “Arms and the Dudes”? It’s one of the few times I was actually looking forward to a Todd Phillips movie in that there was more of a theme as opposed to finding a bro after one wild night.

For the first half of the picture, he approaches the material with an engaging pace and tone as well as injecting in his own brand of humor. David (Miles Teller) is a 20-something with a dream to run his own business and a wife to support him. He makes the mistake, however, of going into the bedsheet business for nursing homes that simply don’t care about quality. With bill piling up and a baby on the way, David seeks a quick means of making a living outside of his depressing career in massage. His prayers are answered when his old buddy Efraim (Jonah Hill) pops up to inform him of his gun running business and that he needs a partner. Despite his objection to the war, David takes the job and the two are off making thousands of dollars on government loophole of the mid-2000’s.

Their rise to power is mostly interesting in how they practiced seedy tactics to get the upperhand on their competition and how they literally drove guns into Baghdad. It’s pretty wild stuff and Phillips has an eye to make these events both humorous and tense. Credit should be given to Teller and Hill who deliver some of their best performances for such characters. I dug Teller’s uneasy rationalization for the slippery slope of greed and it’s hard to forget Hill as a sinister villain with an annoying laugh.

But as the movie enters its second half, Phillips begins to lose sight of his own vision and slips into the standard mannerisms of a picture where greed kills the greediest. Teller’s character becomes less developed in the second act as he transforms into the expository narrator, describing the logistics of everything from weapons contracts to repackaging bullets. Teller and Hill appear to just float through the second act until they gut each other in the third. And it’s during that second act where the movie began to lose me.

For as much as I dig Phillips’ brand of comedy, he’s lacking in making this picture his own. He uses tired music cues such as CCR’s “It Ain’t Me” when displaying scenes of war. His writing for Teller’s exposition starts to fall flat after a while when the movie becomes more interested in the act than the characters. The only signature that feels fresh and original for Phillips is how he breaks up chapters with quotes from the next scene; it’s a move that could be used to build anticipation, but it comes off more spoilerly in that it that it removes tension from certain scenes.

While War Dogs has its moments of cleverness in its amusing method of portraying these young gun runners, it needs a little more of that gonzo vibe to make it truly stand out from its competition. It felt as though Todd Phillips was holding himself back from making a truly bizarre picture and wanted to remain closer to the actual events. In doing so, I felt deprived of a picture that could have been so much more if it weren’t afraid to embrace the bros over bullets.