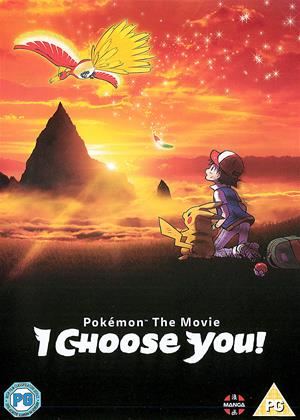 Rent other films like Pokémon the Movie: I Choose You!

Sign up
Pokemon the Movie: Hoopa and the Clash of Ages

Sign up
Pokémon the Movie: Kyurem vs. the Sword of Justice

Sign up
Pokémon the Movie: Genesect and the Legend Awakened

Sign up
Pokémon the Movie: Diancie and the Cocoon of Destruction

Sign up
Pokémon: The Movie: The Power of Us

Reviews of Pokémon the Movie: I Choose You!

There’s a draining nature to the constant continuance of the Pokemon franchise. It was only inevitable that the classic animated adventures of the boy Ash Ketchum and his Pikachu pokemon pal would garner a reboot, given the theatrical reboots of Evangelion and Berzerk. But this could have been a sobering moment; a chance for the Pokemon story to regroup and restructure, perhaps form something grander than just whipping up another batch of Pokemon, pathos, and legends of MacGuffins and Chosen Ones. Oh, how I wish that were the case for I Choose You; new animation, new events, same old Pokemon monotony.

If you grew up with Pokemon, you most likely know the story of Ash and Pikachu. The young Pokemon trainer was late to Professor Oak’s for his Pokemon assignment and receives Pikachu as the last of the lot. They don’t connect right off the bat as Pikachu refuses to get inside his Pokeball but they soon grow to trust each other. The movie is counting on you recalling their first encounter that the film glazes over their connection within ten minutes, shorter than that of the TV episode. And right there is when the film makes its claim that it won’t be a story but a mere bullet point checklist for Pokemon fans to check for accuracy in its own weird way of rewriting the story.

There is a connecting story to Ash’s many adventures of banding together with his familiar crop of Pokemon but it’s a very uninteresting one. On his travels, Ash witnesses a mysterious Pokemon bird of legendary myth. While witnessing this sight, he happens upon a magical feather which could bring peace to the world or destroy it but only for those pure of heart. Uh-huh. Which means there’s a dark-hearted Pokemon trainer as well. We’ve been down this route before. Too many times, in fact, that the premature death of Ash garners hardly a batting of the eye. Sure, because we’re supposed to buy into the suspense that the hero of a new theatrical reboot is going to die so soon. I’m not even mad at the laughably dumb excuse to revive Ash from the dead due to pure-hearted bureaucracy.

Despite some better theatrical animation, I Choose You improves on nothing from Pokemon’s tedium, merely doubling down on the marketing dumbness. No time is spent getting to know the characters or Pokemon that Ash associates with. Whenever they’re not battling about other Pokemon, they’re talking about Pokemon and their histories. But who cares? We don’t learn that much about Butterfree so why should we shed tears when Butterfree leaves Ash to migrate and spawn? We only know of Ash and Pikachu for a few minutes before they start making tearful sacrifices. We only know a shred about the MacGuffin and various Pokemon before the film starts lobbing out terms and events that we’re expected to know about. And why, oh why, is it damn near impossible to just have one, ONE, Pokemon movie without heavy pathos. It was almost home free until a very pointless backstory is revealed of one trainer who watched their Pokemon die out in the cold. What a great scene for a fantasy film of cute monsters targeted at kids.

I Choose You would seem like an easy sell as a new Pokemon introduction that may get an aged coot who left the franchise long ago, such as I, back into the fold. Unfortunately, it’s strictly business as usual for a film meant for the devout and not those seeking more. Having watched the show growing up, yes, I can verify this story very much adheres to the events of the Pokemon TV series. In terms of emotion, however, that aspect is sorely lacking, to the point where even the comedic Team Rocket rivals come off as wasted villains. I never expected a lot from Pokemon but even I know there’s just a tad more here than this boring retread.