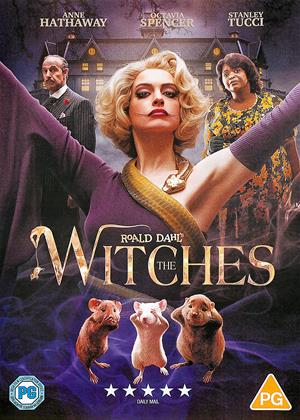 Reviews (3) of The Witches

Bit of a flop - The Witches review by TH

Growing up I loved the witches story and the original film will hold a fond memory being filmed in my town. Angelica Houston is perfect as the high witch and Rowan Atkinson brought the role to life.

This remake should of been great but it's well... very dull.

The special effects arent the greatest and ruins some of the more iconic scenes.

Anne Hathaway is totally miscast and over acts throughout. Stanley Tucci is wasted and Octavia Spencer looks like she is running through the motions. The casting of young boy who looks gormless throughout and acts how most people will be reacting when watching this remake.

Just watch the original and forget this film completely.

For some reason this is billed as a 'reimagining' of Roald Dahl's origin novel although it's simply a straightforward adaptation that apart from some location and period changes is reasonably faithful to the novel. However it lacks the fun and darkness of Nicolas Roeg's 1990 earlier film version and Anne Hathaway, as the Grand High Witch, is dafter than the malignant character created by Anjelica Huston in Roeg's film. Instead of England as the string this story is in late 1960s Alabama and a recently orphaned boy goes to stay with his wise grandmother (Octavia Spencer). When he is accosted by a weird woman in the grocery store Granny suspects a witch is responsible and whisks her grandson off to a plush hotel for safety. Unfortunately the very same hotel where the Grand High Witch is holding a witches convention with a plan to turn all children into mice. This cues lots of Disney style CGI action set pieces with some forced comedy and witches that aren't anywhere nearly as scary as they should be. A mild children's fantasy film that is a bit mediocre and appears to be playing it safe. The 1990 version is far better.

Lacks a bit of bite - The Witches review by PC

This is a beautifully looking adaption of the Roald Dahl classic but it doesn't really add anything new to the first adaption with Anjelica Huston as the Grand High Witch. The special effects are excellent and they don't spare on the creepy witch effects, quite enjoyable but forgettable, a little warning that very young viewers may find it a bit scary!

The Robert Zemeckis take on the classic kids' novel of The Witches is about as expected as a Zemeckis remake can be. Having been obsessed with mastering visual effects from his ImageWorks era, Zemeckis takes this familiar story and merely beefs up the special effects in an attempt to one-up the original 1989 film. However, Zemeckis is playing with fire when trying to top the stellar effects work of the Jim Henson Workshop’s stellar makeup and animatronics that made The Witches such a staple of horror for kids. How could anyone forget the horrifying scene where the witches take off their makeup to reveal their hideous visages? I doubt few will be as terrified by the witches with sharp teeth and largemouths, staged incompetent yet uncompelling computer graphics.

What hurts such a picture is that it feels like there’s a chance to say something so much more that is unfortunately squandered by magical meanderings. It starts off with an interesting enough spin for being set in 1960s Alabama. The orphan boy hero (Jahzir Kadeem Bruno) finds himself staying with his kindly grandmother (Octavia Spencer) who soon gets him to open up over fried chicken, dancing, and the prospect of taking care of a mouse. And then came the witches, targeting the orphan with their hatred of children. Where things almost start to become interesting is when Spencer recommends that she take her grandson to a ritzy hotel to hide out from the witches. Her reasoning is societally sound: Witches only target the poor and forgotten. At a hotel of witch white folks, they’re not as likely to go hunting the disenfranchised. It’s just too bat the societal theme of systemic racism is never harped upon for longer than this brief monologue, which is especially disheartening for a film specifically set in 1968 Alabama.

Of course, what the grandson and grandmother don’t count on is the witches holding their secret meeting within the walls of the hotel. This leads to the hero boy witnessing the Grand High Witch (Anne Hathaway) addressing her army of witches, taking off their wigs to reveal their baldness and their gloves to reveal their three-fingered hands. Hathaway’s performance here is strange in that she puts on a kinda-sorta French accent and then starts speaking like Gollum from Lord of the Rings when her mouth opens wider to reveal more teeth. She has some freaky bits of flying through the air, zapping other witches, and showcasing just how long her arms can stretch in a contorting manner. But it’s a far cry from the chilling effects of the original.

And I know it’s not fair to compare the film to such a creepy treat of children’s horror from the 1980s. But so little within this narrative gives weight to be all that different. The scenery change doesn’t shirk much of the formula, where the hero is turned into a mouse by the witches and teams up with other mice to stop the witches. This leads to a heavy dose of CGI which doesn’t even attempt to be convincing. Consider how people are transformed into rats. They don’t just shrink down into little furry creatures. They explode with a blue fart into the air before turning into bubble wrap and then going full mouse. Slapstick follows as predictably as the first film but without the scary fish-eye lens to make the horror more horrific.

The cast assembled is strong but they’re given so little to do. Octavia Spencer is a wonder but here she can only smile and silently sass her way through a role she has played many times before. Hathway tries to be scary but relies on a lot of her crazy makeup and visual effects to do the work for her. Stanley Tucci plays the snooty hotel manager and, wow, did I feel bad for him playing it so straight in a movie where rats bite him on his genitals. And Chris Rock narrates the picture in a manner that will likely make others recall his over-the-top voiceover bits from a decade ago (and not in a good way).

Perhaps The Witches would do well to be labeled as the less scary version of the classic story. Despite some faithfulness to the original book and some mild amusement here and there, this is a fairly safe picture, which extra strange for a film that presents the chance to be a strong allegory for class struggle and racial divide that is snatched away early for ho-hum silliness of mice and witches.