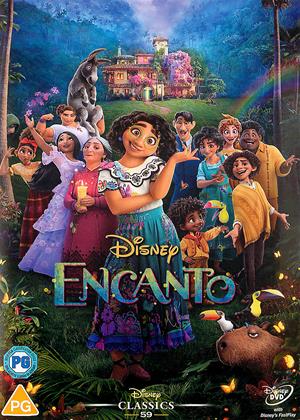 Encanto feels very much like a dose of fresh air for the Disney animation studio that seems to have been stuck in a rut. While Pixar was delving into aspects of existentialism with Soul and bigotry with Luca, Disney seems to have only found lukewarm sequels to Wreck-It Ralph and Frozen. Thankfully, Encanto is the biggest burst of colorful thrills since Moana. That’s why it comes as no surprise that Lin-Manuel Miranda played a role in the music and story.

The film is set in a Colombian village that is home to the Madrigal family. This family is one of magic. Their house is magical as it can transform any room into a whole other world. The family members all possess some stunning power that can aid the town in some way. One of them is super strong, another has super-hearing, and another can transform into anybody. Everybody Madrigal has a little bit of amazement in their abilities.

All except Mirabel. When it came time for Mirabel’s coming-of-age ceremony to discover her powers, the door to her magical room disappeared. She has no powers and it’s made her teen years a bit troublesome to navigate. She still tries to do right by her family and keep up her spirits but it’s a little hard to hold that grin when everyone witnesses you as the black sheep by default.

However, the home requires more than just Mirabel’s enduring spirit to stay alive. It actually requires her help to get keep the family together as well as literally keep the house magical. She starts seeing cracks in the foundation but nobody believes her. There are also cracks, more figuratively, in her family. She starts speaking with others members who don’t find themselves happy. Luisa, for example, is incredibly strong but finds herself overwhelmed with pressure and uncomfortable stating how she feels sad. Isabela may have been seen as the prettiest of the family for both her voice and her ability to create flowers but she also isn’t comfortable with just forming the same old flowers.

The heart of the family is Abuela Alma Madrigal. She founded the house amid tragedy and aims for her family to be happy and prosperous. In trying to keep the family and home together, however, she may be silently and unintentionally tearing them apart. This is best showcased with how she prefers the family not to talk about the banished Bruno, the uncle of Mirabel. Bruno has the ability to witness the future and the future may hold some stuff the family doesn’t want to recognize. Alma is stuck in the past and the future is not embraced, a not-so-subtle commentary on the dangers of orthodoxy.

Everything about this movie is astounding. The animation has a style all its own, where Mirabel is a character worth rooting for as one of Disney’s first animated heroines with glasses. The way the magic is wielded and the house comes alive is quite a sight. And the music is just such a treat. The fast lyrics do a great job doling out the exposition with great energy while also opening up the characters. The writing is also top-notch for delivering a film with as heart as it has humor and music. Consider the balance of a musical number about feeling sad that is laced with images of dancing cows.

Encanto is everything a fantastic Disney film should be. It’s colorful, full of life, has plenty of catchy music, and a real heart beating beneath its fast-paced fun. It’s also refreshing to have a Disney movie where there’s no physical villain to face. It’s an adventure that doesn’t go far in terms of distance but resonates on an internal level that is more common for Pixar films. Here’s an animated feature that manages to be just as much of a musical romp as it is an emotionally mature picture of culture, self, and family togetherness.