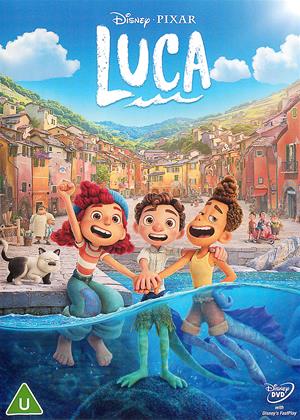 This might just be my new favourite Disney film! - Luca review by giantrolo

We love, love, loved this film! A heartwarming tale of friendship and family, with a hilarious cat thrown in for good measure - what's not to like?! A truly original story that was terribly well animated, as you would expect from the Disney masters. Very highly recommended!

Luca is the Pixar film that is sure to be seen as the underdog title years from now. The adults who have found the animation studio has given them more out of their higher-minded writing for films such as Inside Out and Soul will find themselves feeling starved or underwhelmed by such a detour. It may even seem beneath Pixar that they didn’t pursue a picture of more adult topics and feelings. But, honestly, that’s fine for a film such as this.

Because, yes, Luca sets its sights rather low as a film about acceptance and friendship, with friendship being a higher priority. The story takes place in 1950s Italy where sea creatures hide beneath the waters in their own community. Luca is one such creature who has grown up being told tales of the surface world. His parents say it’s a dangerous place that he should never venture towards while his grandmother of many experiences says it’s a pretty rad place. Too terrified to venture upward, Luca remains loyal by tending to his family’s flock of fish.

But then the orphan Alberto comes into his life and changes everything. Shattering Luca’s notions of the surface world, Alberto leads Luca up on land where he learns all about how sea creatures adjust to land. Stuff like breathing air and changing skin color to reflect a human look seems to happen automatically with rules akin to Ranma ½. Not as automatic is the function of legs, which Alberto helps out Luca in mastering the bipedal movements of a dry world bound by gravity. He also imparts the wondrous vehicle that is the Vespa. Both now share a dream to acquire their own Vespa and explore the entire world.

To accomplish this goal, they venture into a port-side Italian town and learn of a race with a cash prize. The competition is Ercole Visconti, the local bully with his own brand of goons and a questionable age for how many times he’s won this annual race. The ally for the two boys is Giulia, an eccentric and astute girl who wishes nothing more than to win the race. The three of them team up and train for the race while Giulia opens Luca’s mind up to more of the world, including the wonders of space and the fantastic journey that is school. Of course, Alberto fears Luca is becoming too human that he’ll leave him behind.

Luca manages to be a charming picture for being a summer adventure where kids get to be the heroes, even doing so without killing the parents who mostly hang back and let the young ones blossom. They try to get involved in various ways, as with Luca’s parents trying to hunt him down for safety concerns and Giulia’s father being stoically skeptical of the two boys. The allegory of acceptance with how the humans fear sea creatures does a decent job integrating social morals into the plotting, even if it feels a bit too simple in its brashness.

I don’t have to tell you that the film looks gorgeous. It’s Pixar! We expect their films to look beautiful and Luca is no exception. Pay close attention, however, to how much the film mimics the look and feel of a Studio Ghibli film, particularly with the likes of Porco Rosso and Kiki’s Delivery Service. The Ghibli aspect isn’t just present in the rustic setting but even the character designs, best showcased in the exaggerated features of Giulia’s father and their cat with a mustache.

Luca may seem below the bar for Pixar’s best but is still a pleasing enough picture for kids. In fact, kids will probably get more out of it than adults who will no doubt be far more strict in their criticism for the high standards held to the prolific animation studio. As a coming-of-age story, though, Luca gets the job done and has some tenderness and wonder to a straightforward story done right.