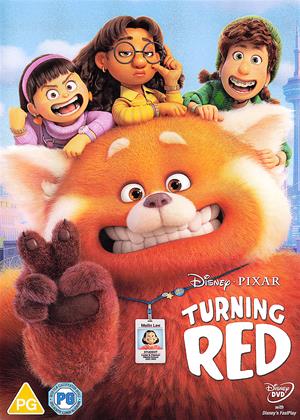 Pixar’s Turning Red is certainly the boldest step forward for the studio concerning the subject matter. Here is a film that is not only willing to approach the coming-of-age story of menstruation with an allegory but has the guts to just drop the allegory and be blunt about what it is about. If you were hoping this film would candy-coat its topic and not mention pads or cramps, you may be surprised how upfront this picture is with the topic.

There’s also an exuberance for such a highly personal tale. The story follows the 13-year-old Mei and her eccentric desire to grow up fast. She’s an ace in the classroom and a major help around her family’s temple in 2002 Toronto. She’s also a good friend in her group that adores the boy band 4*Town. Despite her energy that is so high she can break the fourth wall, she won’t be able to break through her teenage years so easily.

Before the very comical premise of Mei’s transformation takes place, we get a lot of relatable moments of stress, passion, and cringe. Mei finds herself growing more attracted to older boys and more uneasy around her highly scrutinizing mother Ming (Sandra Oh). She’s embarrassed to have such romantic feelings for boys and even more embarrassed when her mother discovers this and publicly embarrasses her in front of everybody.

There are a lot of great themes present in such a tale. The generational divide is particularly interesting for how Ming struggles to connect with Mei and desire the best for her. The best, however, may involve denying who you are, something that is proven not to be effective by the end of the film. It also helps that this story from director Domee Shi is incredibly personal considering she’s an Asian woman who grew up in Canada around this same time period. This is a picture that’s going to speak deeply to a generation who grew up under constant pressure to conform and perform, the anxieties still lingering to this day. It’s a helpful reminder that this next generation may face similar challenges and that we should try to empathize.

For as much as the film speaks to my generation, there’s still a lot of fun to be had with it for the current crop of kids who will gobble up this Pixar picture. The animation style evokes more of the mainstream adoration for anime with the exaggerated expressions and aggressive love for all things cute. Mei and her collective will gush and go doe-eyed at everything from Mei’s cute transformation to the allure of the beautiful boys in their favorite band. Of course, plenty of slapstick ensues with a giant red panda in the city and there’s a lot of funny bits where Mei will break beds and bound over roofs in her furry form.

Turning Red is yet another strong foot forward for Pixar’s animation studio. While they’re not quite blazing the trail for new animation techniques in the same way Sony has with Into The Spider-Verse and The Mitchells vs The Machines, they are bringing forth unexpected and beautifully profound stories to a medium that could use more than just distractions for kids. As far as coming-of-age animated comedies go, this is one of the best by a mile and is certainly going to rank among Pixar’s top films in years to come.