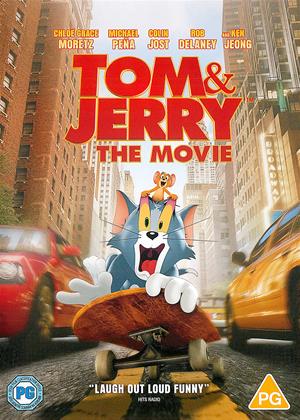 Reviews (1) of Tom and Jerry: The Movie

It's fairly watchable fun film that pods along nicely. In truth theres nothing here that hasnt been done before but it's a lighthearted family film that does the job.

The best thing about this film are the Tom and Jerry scenes but the characters arent terrible just a bit bland.

It's still an alright watch.

The biggest problem with trying to make a Tom & Jerry movie is that the cat and mouse duo only has one bit. They chase each other and get into slapstick antics as they scurry about and get into fights. That’s fine for a 6-minute theatrical short or even a TV series but a feature-length narrative demands more. The sad truth is Tom & Jerry are not built for a film. This isn’t just some revelation with the recent film. It’s been a constant problem. There’s a reason why nobody much talks about the previous Tom & Jerry movie from the 1990s. If you don’t know, it’s because it was such a bland film that had to resort to the characters being fully voiced amid a bland adventure. Other direct-to-video animated films have done away with the voice but are still painfully boring where it seems that narrative is outside the realm for the two characters.

And now we have Tom & Jerry 2021, an updated and outdated film. Sure, the animation is slicker and impressive on a technical level for its attempt to merge animated characters with live-action. But to what end? This film is riddled with all of the same problems as previous Tom & Jerry movies. The central story involves a wedding going down at a New York City hotel and the young and nervous Chloë Grace Moretz could really use some help to make a splash at her job. Of course, the cat Tom and mouse Jerry seem like the least likely candidates for such a job but, hey, they have to do something more than just beat on each other for 100 minutes.

But do they really? Every time the dull and humor-less human character interacts with the cat and mouse feels like they’re bothering them. Every now and then Chloë Grace Moretz talks to both of them as if to say “Are you guys even doing anything in this plot?” And most of the time they’re not. They feel like they’re in their own little world of cartoon antics that are severely restrained by such a live-action setting. There are a few times they change shape and contort their bodies in cartoon fashion but it feels so rare. The majority of their time is spent looking fluid and showing the seems of their 3D-generated selves. For as great as such characters look in frenetic action they seem surprisingly dead when in their many resting phases.

There’s a lot of technical aspects that are incredibly off-putting for the animation/live-action merging but even when casting aside the visuals, this film just isn’t funny. I hate to sound like the snooty adult who feels he’s above kid’s humor but even on a simplistic level of silly, this film is so dead in the water. The antic of Tom & Jerry are par for the course and never go the extra mile to be cartoony. The human story of a wedding and hotel gig is sterile that any attempt at being comedic is incredibly jarring for being misfire after misfire.

And when Tom & Jerry isn’t funny, the unimportant questions start to come about. Why do animals appear animated but human characters are not? Why are certain objects animated also? Are apes animated or live-action based on their genetics? Yes, all of these questions are not important but when dealing with such excruciatingly unfunny film, what’s left to discuss? This film works on a low-bar for its premise and still comes up short.