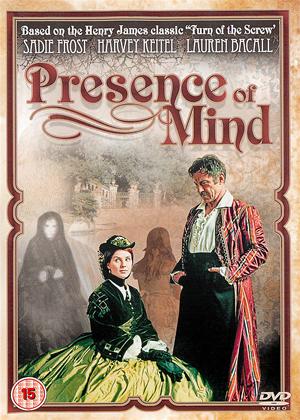 Synopsis:
stunning screen adaption to date in this 19th Century period thriller. Upon the death of her incestuous father, a young woman is called on to serve as a Governess for two children, Miles and Flora. Their uncle, the master, became the guardian of the youngsters after the loss of their parents. Seduced by the charm of their uncle, she accepts his one condition: to take sole responsability for them and never trouble him. Although happy with the location and nature of her job. the Governess soon encounters problems with the two children and the estate housekeeper.
When she stumbles upon a secret room, the Governess discovers dark secrets and begins to understand the reason behind the children's errie behaviour
Actors:
Sadie Frost, Jack Taylor, Tom Keller, María Dulce Roselló, Lydia Zimmermann, Luz Fortuny, Jude Law, Harvey Keitel, Daniel Isidro, Juana Ginzo, Carmen Pons, Lauren Bacall, Ella Jones, Agustí Villaronga, Nilo Mur, Dayna Danika
Directors:
Antoni Aloy
Producers:
Enrique Cerezo
Writers:
Henry James, Antoni Aloy
Aka:
El celo
Studio:
4 DVD
Genres:
Drama, Horror, Thrillers
Countries:
Spain, Drama, Horror, Thrillers

Reviews (1) of Presence of Mind

There have been a number of cinematic adaptations of Henry James' classic psychological horror story "The Turn Of The Screw", ranging from the "The Innocents" (1961), by far the best and most faithful thus far, to "The Nightcomers" (1971), Michael Winner's hilariously misguided prequel in which Marlon Brando and Stephanie Beecham explored fifty shades of watered-down early seventies grey. And later this year we'll get to another one, currently being shot in Ireland by Steven Spielberg. With that kind of competition, this version was unlikely to be either the best or the worst, and sure enough, it's neither.

Unfortunately it's a lot closer to the unintentionally absurd high camp of "The Nightcomers" than the insidiously mounting desperation of "The Innocents". Antoni Aloy, whose directorial career seems to have pretty much begun and ended with this lavish misfire, completely misses the point of the source novel, which is that the ghosts may not exist outside the mind of the narrator. Or maybe they do. Literary critics have been arguing about it since the book was published in 1898, and they still haven't made their minds up. Writing a story with that perfectly-pitched level of ambiguity isn't easy, and portraying it on screen is even harder, but I don't think Aloy was even trying. The implicit sexual hang-ups of the narrator are clumsily made explicit by turning the repressed governess into a victim of horrendous molestation by her late father, because there's absolutely no other way a single woman living in the Victorian era would be hung up about sex, is there?

There are some enormous problems with this approach. If the deceased servants who may be haunting the children deliberately involved them in their sex-games instead of letting them see and hear grown-up things through sheer carelessness, that's a whole raft of backstory you can't possibly show. And if you can't show something central to the plot because it would be so controversial it might not even be legal, why are you making a movie? Another problem arises with the ghosts. Since they were originally written as almost subliminal presences who are very choosy about who they allow to see them and may not exist at all, they don't actually do much, and what little they do in this version, such as hovering over the swimming-pool in the blazing sunshine like something out of an eighties Kate Bush video, is a bit silly. It doesn't help that one of them bears a presumably unintentional resemblance to Ozzy Osborne. And why shift the action to Spain, when the stuffy repression of late Victorian England is so essential to the plot?

It all looks gorgeous, and the two child actors are better than most, but Sadie Frost is barely adequate as the troubled governess. She's nowhere near in the same league as Deborah Kerr in the 1961 version, and she has far less screen presence than the 75-year-old Lauren Bacall. As for Harvey Keitel, he's on screen for about two minutes. This movie tries terribly hard but fails completely because it's so busy looking pretty it forgets to be subtle. The source novel's ambiguity depends on the narrator not really knowing what happened before she arrived. Since in this version the psychological aspects of the situation are so oversimplified that hardly any uncertainty remains, we end up watching a movie which seems to be mostly over by the time it starts, and which doesn't have all that much plot left to show us. Consequently, not a lot happens.

This is a very minor film on every level. Despite its age, "The Innocents" still works far better as a profoundly creepy psychological ghost story that may not be about ghosts. And if it's a version with nudity you want, "The Nightcomers" is a lot funnier.