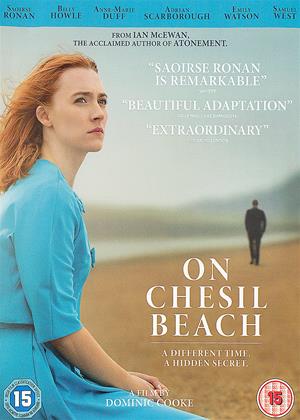 Reviews (13) of On Chesil Beach

I was looking forward to this movie, usually my 'cup of tea', but it just wasn't right. I didn't actually enjoy watching Saoirse Ronan and as for the character she played, well the reason she behaved the way she did, becomes clear through watching the film unfold, but the ending didn't make sense to me: She married and had several children; why and how? Well acted by Billy Howle, but some scary 'face ageing' going on there!

Disappointingly mawkish and slow, disjointed and unconvincing. It's a fairly thin storyline and would need spellbinding acting to make it worth watching. I am sure that they all did their best.

I have disagree with the other reviews, we enjoyed this film, the story is well told on how the couple grew up and came to meet each other. Through out the film it is obvious that the girl isn't as loving as her husband to be and there will be problems ahead. remember this is set in an era when there was no sex education and most couples were still virgins before they wed. After the wedding the story follows the male life, up until 2007.

Unusual and full of depth - On Chesil Beach review by SA

There is great depth and sadness to this tale of love gone wrong. The love story, told in flashbacks reveals the potential for a happy future for the two rather lost young people. Through lack of knowledge, the innocence of the times, and the character^s own flaws, things go painfully wrong on the wedding night and neither of them are able to work through it. There is a lot going on in this film, some things are not quite resolved,. Is Flo asexual, damaged by abuse from her father or just scared and confused, in need of sensitivity and understanding. The sadness of their lost future together hangs heavy as it's made clear just how much one moment changed there lives. A refreshingly unusual story, beautifully made, and acted,

This narrative was set in the early sixties. I can see why the suffocating 'secrecy' around sex of that time had such a profound affect on this young innocent couple. The film showed us how they were trapped and without the emotional maturity to cope with the disaster that was unfolding.

No wonder there was a reaction against this through the social change with the sexual revolution just round the corner, and thank goodness for it! But sadly it happened too late for Florence and Edward.

I struggled with the film version, it didn't convey the intensity of the emotions, in fact it diluted them. Some of the filming was meaningless and the music intrusive. Disappointing.

I must confess I have not read the book yet so I am not qualified to judge this film as an adaption of the book though Ian McEwan did write the screenplay. Some reviewers expected action but this was a satisfying psychological study in itself and was sensitively acted though I thought the parents' characterisation was a little overdone in order to give explanation to the problems of the central couple. I'm still trying to resolve the two seemingly conflicting endings. Maybe the book itself will provide me with the answer!

Boring beyond Belief - On Chesil Beach review by PV

I watched 20 minutes of this THEN thankfully the DVD got stuck. I decided not to get a replacement.

Those 20 minutes showed me that 1) Ian McEwan may well write pretty prose and deal with big themes in his novels BUT he does not an exciting tale write; 2) Novelists should NOT write screenplays from their own novels - that was disaster lies.

This is just awful - typical state-funded British film-making. Our taxes and lottery funding paid for this, folks.

I heard the same novel serialised on the radio. Not a great novel - all about a newly married couple so shy they don't know what to do in bed on their wedding night (and that, folks. is the plot). Mildly interesting and with McEwan's trademark pretty prose. But thassit! This is NOT a great story or even a story at all - more a character piece, For radio or theatre, fine, NOT for film.

I do not care if they 'did their best' - imagine anyone else messing up getting that let-off! Oh the bus driver drove off a cliff - but never mind, he did his best, The teacher lost 3 kids on the outing who then drowned - but never mind, she did her best.

This film is AWFUL - tedious, pretentious rubbish. Only watch if you are tired of life.

Stagey melodrama set mostly in a single room and on the eponymous beach. Numerous irritating flashbacks explain what led up to the present but add nothing to the non-action. Scored by a string quartet that adds to the theatricality. There’s a brief emotional coda but it comes far too late to do anything but show what most of the film lacks.

I agree with the above review mostly. Was the director and screenwriter just out of college?

Some of the dialogue was so corny, some of the music so inappropriate. Although I love classical

music, even that didn't sound quite right. What's wrong with silence? French and Danish films seem to get it right. Was the girl meant to be at fault re. the wedding night, god the guy was so inept and insensitive

(and I am a bloke!). Overall quite a disaster I think. I'd really like to read a review from someone who liked

it, maybe I've got it all wrong.

There's a unique English sadness to this social drama about sexual repression set in the early 1960s just before the explosion of sexual freedom that marks that decade. Edward (Billy Howle) and Florence (Saoirse Ronan) are two University students, she a talented classical musician, and they, in the heady days of youth, meet and fall in love. She's from a well to do family with two dominant and self focused parents, and he's from a more humble background with a caring father and an artist mother who has mental health issues following a terrible accident. The narrative centres around Edward and Florence's wedding night, in a horribly conventional seaside hotel, where as virgins they are faced with the awful realisation they are unprepared for what turns into a humiliating fiasco and irreparably effects their lives. The story has two codas, one set in the mid 1970s and the second in the early 2000s, and reveals the fate of the two characters. This is a moving and very well acted film although it stubbornly withholds some answers which may leave the viewer a bit frustrated but it's a neat period piece adapted by Ian McEwan from his own novel and worth a watch.