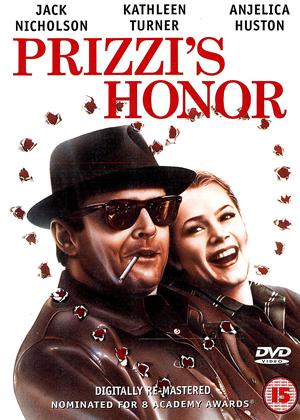 Pretty average, despite the awards, the A-list cast and the director - Prizzi's Honor review by RP

Richard Condon is one of my favourite authors - I like his excruciating detail and the sharp satire he brings to bear. Several of his books have been filmed: the best known is probably 'The Manchurian Candidate' (twice) and 'Prizzi's Honor' is another, based on the first of a series of Condon's books.

I've been catching up a few of Jack Nicholson's films that I've either missed or seen many years ago and he stars in this black comedy as Charley Partanna, a dim-witted Mafia hitman working for the Prizzi family. He falls for Irene Walker (Kathleen Turner), spurning Maerose Prizzi (Anjelica Huston) in the process, but does not initially know that Irene is also a contract killer and double-crossing the organisation. Things go downhill as Irene is hired to whack Charley, and Charley is told that Irene 'has to go'...

Anjelica Huston won a 'Best Supporting Actress' Oscar but good acting must have been thin on the ground that year - it's really nothing special. The film won several Golden Globes for its stars and director and a BAFTA for 'Best Screenplay' but it really doesn't seem all that great and while it's not unlikeable it is most definitely not one of Mr Nicholson's best.

3/5 stars. Pretty average, despite the awards, the A-list cast and the director.