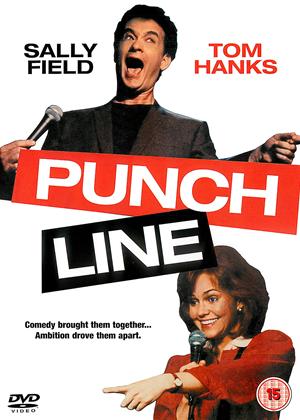 Too fast and too course - Punchline review by Harry

Its a pity Tom Hanks got into this movie - it doesn't sit well with his roles in Forest Gump or Castaway, which all the family could enjoy.

From the start it was fast-talking (as US movies and TV series often are) and we could not keep up with the lingo.

Added to that the language started to get course, though that may accurately reflect the world of American comedy at the level the film was depicting.

We were not enjoying it at all and abandoned it as unsuitable.

Before "I'm Dying Up Here" - Punchline review by LS

This film deserves more appreciation than it's gotten over the years. Tom Hanks' characters are generally a version of Tom Hanks, but despite some similarities I saw the character rather than the actor. Hanks picked up the right rhythm and delivery of a comic with a tight 10.

I think marketing let this film down more than anything else - Columbia labelled it a comedy. Basically it was a dramedy, and or maybe a comgedy (I made that up, sorry.) I think if this were a limited series on Netflix viewers would rate it more highly. In many ways "I'm Dying Up Here" resembles this film. And well it should - it features a number of the actual comedians whose life events "I'm Dying Up Here" depicts and / or references.

After so many series demystifying and deconstructing industries, this has a place among them. Yes the Sorkin efforts known and unknown do it better, but that is their object. This is a backstage view of the main stage of a comedy club. The most dramatic and tragic scenes of the film hits the mark effectively. You'll see a few pre-cursors of The Marvellous Mrs. Maisel as well, speaking of dramedies. There's a few hints of "A Star Is Born" tropes as well

The cast is great and does a great job, although Sally Field's acting talents may be a wee bit wasted on a role that fails to be the equivalent. I think in light of the nostalgia for various period stand up series, this deserves a second look. Also fun to play "spot the actual standups of The Improv and The Comedy Store of the 70s and early 80s.