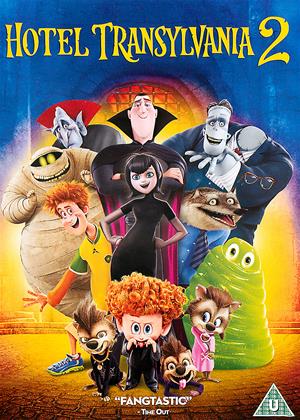 Excellent film! My 6 year old loved the first Hotel Transylvania so we took her to see this at the pictures, and now she watches the DVD of this film more than any other.

Sequels are so damn difficult, aren't they? The first movie was another animated feature that seemed so fresh and inventive, full of great gags (both sight and sound) and a neat little story. Needless to say, this follow-up revisits the same characters and main location, but with mixed success. The plot is not a bad one, but nor is it fully engaging. It gives the opportunity for some wicked satire about modern parenting, our ever-so-controlled Politically Correct universe, and American culture in general, but it also flags too often, with 'comic' scenes that fall flat and too many weak ideas that just don't come off. Overall, it's perfectly fine, and most kids who enjoyed the original will probably enjoy this too, but it just doesn't quite have the spark or killer idea to make it memorable.

As much as I’d love to declare Adam Sandler a complete dud of an actor with his recent pictures The Cobbler and Pixels, I have to admit that Hotel Transylvania surprised me with how much fun it ended up being. Sandler starred in that picture with his usual troupe of actors, but they were kept contained under the calculated slapstick of director Genndy Tartakovsky. With this sequel, Sandler becomes more involved as he co-wrote the script, but did so with animation veteran writer Robert Smigel. Once again, it’s a genuine surprise from an actor who almost always disappoints. If he sticks with the right people in animation, he’ll go far. Or about as far as he can go at his current age.

Touching on Sandler’s trademark focus of family, Dracula (Adam Sandler) is ecstatic to find that his recently married daughter Mavis (Selena Gomez) is going to have a baby with human hiker Jonathan (Andy Samberg). The two have a little baby boy named Dennis, a cute kid with red curly hair. Mom and dad love him whether he turns out to be a vampire or a human, but grandpa Drac is getting antsy about his grandson taking after his lineage. If Dennis doesn’t get his fangs by the time he is 5, they’ll know he is fully human. Mere days before the kid’s fifth birthday, Dracula offers to babysit Dennis while Jonathan distracts Mavis with a visit to his hometown in California. The legendary vampire hopes he’ll be able to scare the fangs out of Dennis with some old-fashioned monstering of his old pals. But it may be a little tricky now that monsters are more open and accepted into human society.

The charm of Hotel Transylvania has not diminished with age. The title hotel is still just as fast, fun and creative with plenty of different monsters roaming the halls. But now the world has opened up with all sorts of new monster accommodations including monster/human weddings and night camps for little vampires. Most of the monsters seem cool with the transition, but old Drac is a little miffed that his monster memories cannot be relived. Desperate to break his grandson in as the new monster on the block, he finds that his dark woods of prowling have been transformed into well-lit parks. Monsters would much rather pose for selfies than frighten the human populace. It’s a fun dynamic and a great parallel for the changing times that any old timer can relate to.

It’s amazing how this animated movie touches on Sandler’s fondness of family, but does away with the junk of his other movies that dealt with the same subject matter. The mean-spirited nature and bland brand of low-brow is sidelined for the snappy animation that may be mindless fun, but still sweet. Compare this picture to the likes of Grown Ups 2 - both films about families - and you’ll find this is night and day for Sandler. There’s a higher level of comedy delivered through the physical antics of Gendy’s noteworthy animation style and a distinct lack of gags involving deer urine.

The movie isn’t perfect, however, in that it shoots for higher allegories that never quite culminate. The mingling of monsters and humans contains plenty of relation to interracial relationships facing prejudice, but it’s only touched on for a few scenes. That goes double for the disconnect of older generations, the changing of the times and the warmness of being a grandfather. All great subjects that are merely given as much time to evolve as the sight gags allow.

Hotel Transylvania 2 doesn’t redefine or improve greatly on its predecessor, but it’s still a charming outing for one more round of gags with these great monster characters. There’s some creative animation and some great humor to be had, but not much of a story to keep it cohesive. Wasted potential? Perhaps, but not the worst bit of mindless entertainment as far as simple animated movies go.