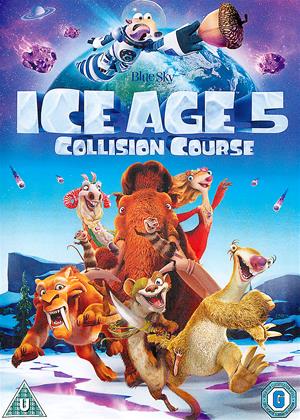 Well it's more of the same old thing as the others , this for me was the worst one , couldn't even find it funny.

Hollywood always likes to milk a series as much as possible, and is another easy earner for Pegg at the same time. He has scored big time with Startrek and now this!

Kids will love it, and has some quite clever moves in it, although a lot of the dialogue is a bit advanced for the very young, and obvoiusly inserted to appeal more to the parents.............

Give it a miss! - Ice Age: Collision Course review by CS

You know when a film is a dud, if you start to lose interest and your attention wanes after the first ten minutes, then never comes back to the film again! This film does exactly that, right for the opening sequence you can see that it's not going to get any better and rather sadly, it never does! I found this extremely boring, frustrating and dull to watch. Whilst the first three films in the series are really good, why they bothered with this one, apart from the money, is beyond comprehension, as it delivers nothing new, constantly retreads the same old ground and I found Scratch simply annoying! There are too many new characters, existing character and irrelevant characters thrown in, creating a confusing melting pot of banality. Too many story lines and diversions, make this lose it's way and the plot is just naff! A badly written script, not many funny moments, as I say its al been done before and this offers nothing new, nor does t move forward, in fact it really kills off the franchise as far as I'm concerned!

As with all Ice Age movies this one won't let you down. Usual cast of characters and a whole lot fun. Good family entertainment in my opinion.

There are only so many times that cute CGI creatures can narrowly avoid being consumed by apocalyptic forces that you just wish they’d die already. I know that’s a rather morbid thought for an animated picture intended for little ones, but there’s only so much of Sid, Manny and Diego I can take before I want them to suffer a horrible fate they avoid every picture. This is the fifth movie in the Ice Age series and it’s already becoming confusing trying to keep these movies in order with too many characters and uninteresting plots.

The characters have lost all their edge; and I do mean all of it. Mastodon Manny (Ray Romano), the once curmudgeon of the group, has been reduced to Ray's sitcom character from Everybody Loves Raymond. He has gotten married, had a child and now has to deal with his daughter falling in love with another mastodon. I guess the writers and director felt that kids needed to experience Father of the Bride sooner or later. Sid the sloth (John Leguizamo) has become increasingly annoying as the bachelor that wants to settle down, but is never as lucky as his associates. Spoiler: He doesn’t find his true love in this picture either despite the movie teasing such a prospect. The tiger Diego (Denis Leary) has lost all his crassness in favor of attempting to settle down with his new love interest and have children. These characters have all moved on and I wish this series had as well.

The disaster for this picture is a comet hurdling towards Earth. How do they stop this cataclysmic event from occurring? It turns out there was a previous comet that touched down and left shards of some magnetized crystals that also hold the secret of eternal youth for some reason. Through the aid of a mental vision of Neil DeGrasse Tyson (a popular cameo of this era), the gang comes to the conclusion that if they gather enough of the crystals in one spot they can repel the comet with magnetism.

But there’s not much danger to such a scenario considering how close the crystals are and how little opposition is present. There’s a llama that’s become obsessed with the crystals and won’t let them go, but he’s no threat or even a funny character, relying mostly on his flexible yoga-ready body for visual gags. There’s a pack of flying dinosaurs that are counting on the comet hitting so they can rule the sky, but their arc is also reduced to uninteresting family squabbles. Skrat is still the most interesting of the lot simply for the fact that he doesn’t talk, but his slapstick antics, even in the fresh setting of an alien spaceship, are growing a little long in the tooth.

There are so many underdeveloped characters weaved into this sad excuse for an adventure that it’s hard to care about any of them, let alone have any of their jokes land. Not to mention the B-plots of the relationships with these characters has become so repetitive that I actually had deja vu. Even in trying to remember this movie I became confused about what number this movie was, which character went through which arc and what apocalyptic gags were used. Why are the Ice Age movies turning into The Land Before Time movie series with its double-digit direct-to-video sequels? More importantly, why hasn’t Ice Age been reduced to home video instead of theaters? Haven’t parents suffered enough?

After five of these movies, it seems pretty clear that some outside force wants these animals to die and soon. The ice age doesn’t kill them, a flood doesn’t kill them, dinosaurs don’t kill them, cracking continents don’t kill them and now a comet can’t do them in. The only other means of killing off these characters would probably be a volcano explosion or starvation. So get ready for Ice Age: Lava-Palooza and Ice Age: Left-Overs. Don’t worry, the characters won’t die; they’ll probably be saved by Skrat in some way and then Manny will come to terms with being a grandfather.