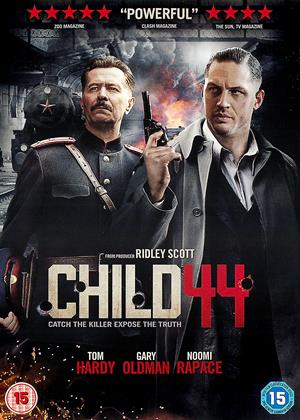 Average film, but a very big disappointment after the book - Child 44 review by RP

I enjoyed the book by Tom Rob Smith when it was published in 2008 and I have also read (but enjoyed a little less) his follow-up books 'The Secret Speech' and 'Agent 6', all featuring Leo Demidov as the central character. So I was very much looking forward to the film - only to be seriously disappointed.

The book conveys well the starvation in Ukraine in the 1930s and the fear of the citizens and the paranoia of the whole state in Stalin's USSR. Not only does the film not convey this particularly well, but the beginning and end of the killer are entirely different from the book, and the bizarre relationship between the killer and Leo Demidov is entirely missing. Since this is a crucial part of why and how the serial killer commits his murders, having a different method in the film makes for a critical difference. While the film is clearly based on the book, there are so many detailed differences that if you have read the book, the film is a disappointment.

Just to re-cap the storyline: Set in 1953, the final year of Stalin's rule, Leo Demidov is an Moscow-based MGB officer. A friend and fellow officer's son is found murdered - but as there is 'no crime' in the USSR, this is explained away. Separately, Leo arrests a vet who has customers from the US Embassy, making him a probable spy. Under torture, the vet denounces a number of people - including Leo's wife, Raisa. Leo refuses to denounce his wife, insisting she is innocent, and is demoted to the militia and sent to a small town in the sticks. Here he finds evidence of other murders and risks his career - and his life - tracking down the killer. His friend's son (the initial victim) was in fact the 44th, hence the title 'Child 44'. The killer is eventually tracked down and the film ends on a hopeful note (as indeed it does in the book).

There are some well-known actors in the cast - but for example Gary Oldman who gets second billing has only a minor role. The central characters are played by Tom Hardy as Leo Demidov (miscast and too muscly), Naomi Rapace (still trying to escape the typecasting of being the 'Dragon Tattoo' girl) who isn't bad in the role of Demidov's wife Raisa, and one of my favourite Brit actors Paddy Considine as the killer. But even he seems miscast.

Events in the film are poorly explained - if at all - and it can be difficult to follow. Things aren't helped by the silly, bogus Russian accents nor by the low lighting levels throughout most of the film. Perhaps it's an attempt to make the old USSR look grey and unattractive...

I appreciate that it's not easy to translate a novel from the page onto the screen and I can appreciate a film as being a drama entirely separate from the written word on which it may be based. But frankly, this is a poor and disappointing film.

Despite the big-name actors and having Ridley Scott as producer, this is at best an average sort of film so I would normally give it 3/5 stars. But because it's such a disappointment after the book, I'm going to mark it down to 2/5 stars.

I really enjoyed this film , as a reviewer has said they didn't because they have read the book. I've not read the book so if you haven't you will probably like this all so.

Set it 1953 under Starlins rule, there is so much paranoia from everyone living there and so much corruption you can't trust anyone. Great acting from everyone , the story kept me gripped throughout the film.