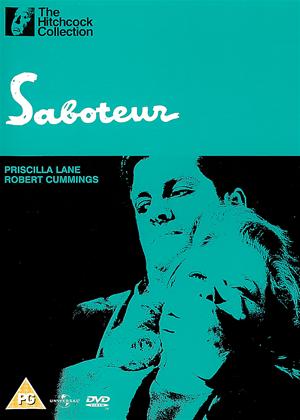 After Pearl Harbour Hitchcock developed an idea which was essentially a reworking of The 39 Steps. Selznick wasn't interested but offered the project and his director to Universal.

It hasn't quite the magic of the earlier film. Hitch didn't get Cooper and Stanwyck as he wished and had a limited budget, But Robert Cummings is fine as a working everyman wrongly accused of industrial sabotage going on the road, into the heart of the country to clear his name (becoming attached to the suspicious Priscilla Lane). He is that staple of American cinema: the man who is placid in peace, but determined when under threat.

Some encounters allow opportunities to express patriotism. Others teach us to be wary of the motives of strangers. I  like the episode with the stars travelling with a train of carnival performers which offers an explanation of the principles of democracy.

And it all ends with the famous showdown up on top of the Statue of Liberty, a location offering a very literal illustration of what they were fighting for. Out of his meagre budget and B-stars Hitch made a fine film of comedy and suspense.

Glass half full Hitchcock is still a good film! - Saboteur review by AP

I've watched far to much Alfred Hitchcock films. In my, and many of people's opinion they are works of genius!

Looking at his extensive filmography there is still the odd guilty pleasure I have for whatever reason overlooked. Saboteur from 1942 is one such film.

A second world war thriller from during the conflict. Set in the U.S. where Brit Hitchcock was under contract by David O. Selznick by then it deals with elements that were trademark facets of some of his better known films. The innocent man being on the run, chased by lawmen trying to prove his innocence.

In this instance the innocent man is a factory worker, Barry Kane (Robert Cummings). Wrongly implicated for a fatal fire at the factory.

Whilst on the run from California to New York, Kane ends up wooing a law abiding young lady, Pat Martin (Priscilla Lane). The pair do have a screen chemistry as the film develops.

The real bad guys are like a group of terrorists in a James Bond film. Sabotaging not only the factory but a major ship launch in New York.

If you have already watched more mainstream Hitchcock such as The 39 Steps a similar film follows but with a U.S. rather than U.K. setting.

Not one of Hitchcocks best films but certainly not the worse, call it middle of the way. Glass half full Hitchcock is still good!

Hitchcock Hit - Saboteur review by NO

Typical Hitchcock-Dark Handsome man &Blonde chased by Police & badmen,reminiscent of the 39 steps even to the gun in the upstairs

gallery.Very well done photographically - look at the extras to see how the Statue of Liberty shots were done.