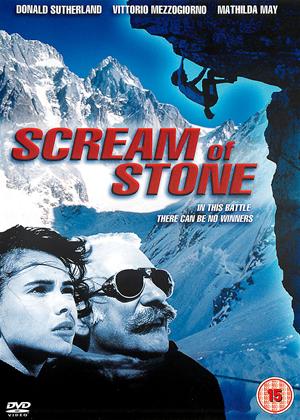 Reviews (1) of Scream of Stone

A fascinating story, based upon true stories.

There's an icy peak that has not been climbed in Patagonia. An embittered Roccia, a driven mountaineer who climbs mountains because he has to, and a younger, more commercially minded sports free climber, set out to climb the peak. Their relationship deteriorates, with both wanting to be the first to reach the peak. It is a hazardous climb that has killed, or seriously injured people before.

This is a complex movie. Herzog lets the story develop out of the situation - so you have to watch carefully - as some themes or ideas are easily missed unless you are paying attention. The story compresses the real story of the Cero Torre climbs that played out through-out the 50's into the late 80's/early 90's. The landscape of Patagonia is as much a character in the piece with windswept lonely oddball characters wandering about. The film is tense and gripping, and a second watch reveals more detail.

There is excellent footage of free climbing and rock climbing from its day (these days they'd probably use drones and or wonderful digital cameras. Certainly to get footage like this would take a lot of effort, and would present some risks to the camera man, as well as the climber. A challenge that would probably be solved with drones, or with the new lenses that are available today. The footage that is there is an achievement that should be appreciated for the challenge it presented in its day.

Not a typical Saturday night's entertainment - there's no car chases or guns, but a man driven to distraction by a mountain.