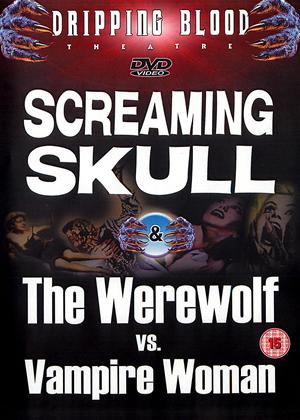 Synopsis:
Screaming Skull
An already anxious wife is terrorised by unexplainable happenings orchestrated by her greedy husband in an attempt to drive her insane. This film is a gem from a time past whose frissons will continue to creep stealthily into your subconscious, Beware, they say for you never know what can strike out from the darkness of either your mind or the room you are in.

Rent other films like Screaming Skull / The Werewolf vs Vampire Woman

Reviews (1) of Screaming Skull / The Werewolf vs Vampire Woman

Do The Monster Mash! - Screaming Skull / The Werewolf vs Vampire Woman review by Count Otto Black

This review is mainly of "The Werewolf vs. Vampire Woman", since the B-feature on this disc, "The Screaming Skull", is so minimal in all respects that it resembles "The Lost Skeleton of Cadavera" minus 50% of the cast, 75% of the budget, 90% of the skeleton, and 100% of the jokes. It's notable only as the film with possibly the most desperate B-movie gimmick of them all: free funerals for people who died of fright while watching it! Though I seriously doubt they ever had to make good on that promise.

The main attraction isn't significantly better in artistic terms, but at least it's much more eventful. Sadly the print's in terrible condition. I also suspect it's heavily cut, since there's none of the gratuitous female nudity you normally get in Italian horror films from this era, despite several moments where it looks as though there's about to be, so I assume some of the gore is missing as well. Not that any of this matters, since it was never a masterpiece to begin with. It's hugely derivative of other films, notably the German "Blind Dead" franchise, and even more blatantly, Mario Bava's "Black Sunday", only without any of those subtle qualities known as "talent" which made that movie the horror classic this clunker can only dream of being.

The addition of a werewolf, presumably inspired by those crappy Universal sequels in which tired old monsters met each other in various combinations and/or Abbott and Costello, turns the whole thing into a hopeless muddle where no-one's motivation makes much sense, unless they're attempting to break the horror-movie record for repeatedly ignoring screamingly obvious warnings. The prologue is particularly baffling, since it doesn't belong anywhere in the continuity of the rest of the film; it looks very much as though the director felt he had to reassure audiences from the get-go that both of the promised monsters really were in the movie, in case the obligatory slow bit at the beginning before the horror kicks in had people fleeing for the exit, unable to bear the most truly horrifying thing in the film - the leading lady's "acting".

There are tiny glimmers of style and atmosphere here and there, though all of them seem to have been pinched from some other film, but it's best viewed as an unintentional comedy with all the clichés present and correct in no particular order and turned up to 11. Of special note are Paul Naschy's grimaces as his lycanthropy kicks in - there are moments when he could almost be William Shatner! - and the championship level of stupidity displayed by The Final Girl who, when specifically told not to forget the crucifix which is her only defense against the vampires that have repeatedly tried to kill her, instantly forgets the crucifix for no reason at all. This is by all normal standards an absolutely dreadful movie, but I'm giving it twice as many stars as it deserves for being gleefully unashamed of its own loopiness, and therefore a lot more fun than many films which cost far, far more. A surprising number of which have both werewolves and vampire women in them.