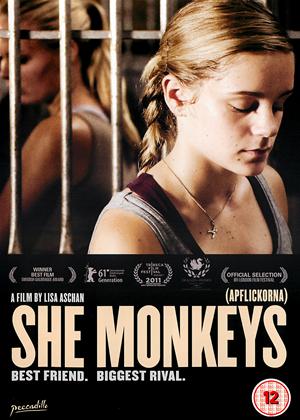 Reviews of She Monkeys

She Monkeys (aka Apflickorna) review by Alyse Garner - Cinema Paradiso

A dark and rather eerie drama set against the backdrop of the Swedish horse jumping circuit Emma and Cassandra find themselves pitted against one another both off and on the field where their latent homosexual attraction to one another manifests itself in acts of both physical and psychological challenge.

Like beasts in the wild Emma and Cassandra seem to be locking horns over their own mental territory – and the movie plays out this dark and dramatic sequence with both tension and elegance; creating a thoughtful and gripping piece. The quasi-lesbian competitiveness could not help but remind me of another dark female led drama, Darren Aronofsky’s Black Swan, that also vibrated with a tense mixture of desire (both sexual and professional) and uncertainty.

Although it is the story of Emma and Cassandra (played flawlessly by both Mathilda Paradeiser and Linda Molin) that takes the narrative forefront it is the subplot and the performance by young Isabella Lindquist that truly steals the show. Playing Sara, Emma’s younger sister, Lindquist portrays the childhood struggle to exist in an over sexed world at an age where you are neither child nor adult but the confused mid point of adolescence where you both crave the pleasures of adulthood but fear the realities of responsibility. Her longing over her much older cousin and determination to wear a bikini despite her young age are not only insightful moments of social comment but also excellent demonstrations of Lindquist’s ability to portray a character with depth and a vast catalogue of emotions.

Like Black Swan this is not an easy film to watch, it takes attention and determination – however for those with the patience for subtitles and a rather dark and dramatic disposition She Monkeys is both highly enjoyable and thought provoking.