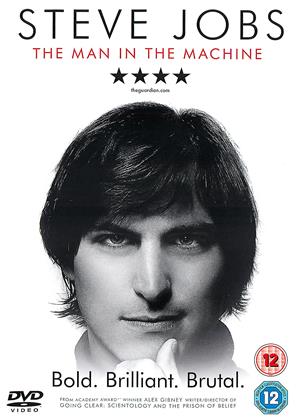 Synopsis:
In his signature black turtleneck and blue jeans, Steve Jobs' image mas ubiquitous. But who was the man on the stage under the giant iPhones? What accounted for the grief of so many across the world he died? In 'Steve Jobs: The Man in the Machine', Oscar-winning director Alex Gibney presents a critical examination of Jobs, revered both as an iconoclastic genius and denounced as a barbed-tongued tyrant. The film is a candid telling of the Apple legend through interviews with a handful of those close to Jobs at different stages in his life. 'Steve Jobs: The Man in the Machineis an evocative portrait of his legacy, and our relationship with the computer.
It unravels the larger than life myth he so deliberately crafted, and examines the endurance of his values which continue to shape the culture of Silicon Valley to this day.
Actors:
Steve Jobs
Directors:
Alex Gibney
Producers:
Alex Gibney, Viva Van Loock
Writers:
Alex Gibney
Studio:
Universal Pictures
Genres:
Documentary, Special Interest

Rent other films like Steve Jobs: The Man in the Machine

Reviews of Steve Jobs: The Man in the Machine

Steve Jobs: The Man in the Machine review by Mark McPherson - Cinema Paradiso

In the wake of Steve Jobs’ death, there was a surge of emotion throughout the world. A flood of emotions pour out from those that knew him, worked with him or were patrons of his Apple brand. This documentary opens with footage proceeding Jobs’ death with customers leaving flowers by Apple stores and a child in front of a webcam talking about how important such a man was to technology. Such an introduction may lead one to believe that this will be an emotional fluff piece on the man and his legacy, but this is not the case. This documentary delves deeper into the icon of iProducts, warts and all. And there are some very big warts on this legacy.

A labor of love by Alex Gibney, he attempts to dig deep into all that made Steve such a memorable character. Through interviews with various people who knew him in many ways, Gibney peels back layer after layer of what Steve left behind. A programmer painfully recalls how his devotion to Apple in the 1980’s led to him losing his wife and children. A Fortune magazine writer divulges the strange treatment he received from Jobs when trying to conduct an interview. A Gizmodo journalist walks us through the odd and uncomfortable situation he found himself in after discovering an iPhone prototype left at a bar. Some look back on Steve with tearful admiration while others view his past actions with troubled silence. Whatever their stance, they’re not afraid to bare it all from Jobs’ philosophical methodologies to his unlawful business practices.

Since there have been several documentaries and docudramas based around Steve Jobs, some of this content will be familiar for the history of Jobs and Apple. While the key moments of his life are covered, the documentary does its best to showcase what little there is left to be said about the man and his company. There are no interviews with Bill Gates or Steve Wozniak as their stories have been told to death. No one subject is harped on too long from the 1984 Apple advertisement to the creation of the iPhone. In two hours, Gibney wants to paint a complete picture from a technological, business and human perspective.

Some of the archival footage Gibney lifts is rather remarkable. The movie opens with footage of Steve right before he’s about to go live on the air, constantly cursing god in fearful astonishment before he addresses the television audience. A rare glimpse of a closed interview about his illegal stock plan reveals how Jobs carefully weaves his stories to dodge the worst of accusations. Steve Jobs’ famous D3 interview is brilliantly edited alongside the horrific issues with Apple’s factories in China. As Jobs’ final days widdle down, Gibney makes our eyes follow each one of his public appearances as the icon grows weaker with each demonstration. It’s a fitting way to draw closer to his end after so many damaging practices to remind us that he was not a god. He was human and he was dying.

There is a lot to absorb about Steve Jobs and his impact. From various biographies and tell-all books to an endless stream of documentary segments and interviews, you could spend hours getting to know this man from just about every angle. Steve Jobs: The Man in the Machine attempts to be the all encompassing film built for those familiar with this material that want it all served up in a complete package. Gibney ends the movie by asking us to seek how our own lives were shaped by Jobs and what that meant to us. Whether you view him as the bearded man that built your iPhone or the tech giant that bullied his employees, we all have our views of Steve Jobs. What’s most important is to view him from all of these perspectives in that we can better understand what went through his mind when he named a computer after his daughter or ran off to Japan for meditation. It is then that Steve takes on a form that isn’t just the untouchable giant or the nasty villain, but the David that became Goliath.