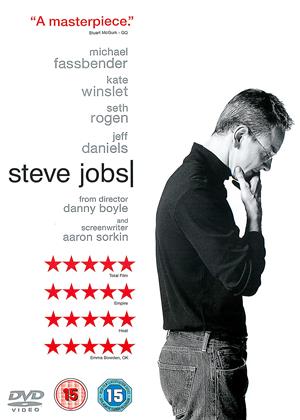 I disliked this film for several reasons: firstly, because Steve Jobs was nothing more than a jumped-up computer salesman who created his own god-like myth which way too many sheeple are prepared to swallow m(others created computers: Woz, the designers at Apple, the British Jon Ives who created the iMac); secondly, because it's all rather wordy and worthy - and, frankly, a bit dull.

I suspect if people buy into the Jobs myth they'll like the movie. Me, I don't rate Steve Jobs at all - he's no genius and invented nothing. And he did NOT invent a pocket digital storage device in the iPod either (other versions came first).

Still, it passes the time but is rather a boring and irritating film about one of the most over-rated men in history.

This is a boring and dull rendition that shows Steve Jobs to be arrogant, cold, callous and obsessive. Was he like that? I don't know, but I do wonder why he was put on such a very high pedestal.

The movie starts, runs and ends in the middle so if you're looking for his life story, this isn't it.

A struggle to sit through.

I watched it but it just seemed there wasn't that much story.

They seemed hard-pressed to make him at all an interesting person.

What a nasty man - Steve Jobs review by AL

I didn't know much about Steve Jobs, apart from his products. What a heartless bully he was. Story wasn't great or that gripping, but enjoyed the insight into him and Apple. However, fantastic acting by everyone, hence my mark. With lesser actors/actresses this would have been a 2 or 1 start film.

Danny Boyle’s take on the life of Steve Jobs takes a much different angle than past interpretations. It doesn’t try to tell his origins as in The Pirates of Silicon Valley nor does it seek to sum up all of his life as in Jobs (2013). Thanks to Aaron Sorkin’s screenplay, there’s a focus given to three key points of Jobs’ life literally behind the scenes. The audience may feel a little cheated in that we spend the entire movie following Steve behind various venues, but it’s a fresh perspective that carves out the more interesting aspects of his life for the real drama rather than serve it all up on an overstuffed platter.

Though many parts of Steve Jobs’ career and personal life are covered over two hours, the most crucial aspect is the connection to his daughter. During his 1984 launch of the Macintosh, Jobs (Michael Fassbender) is confronted by his ex-girlfriend Chrisann Brennan and her 5-year-old daughter Lisa. While Steve bickers over the likelihood of Lisa being his daughter and his frustrations over an article about him in Time magazine, he hands Lisa the mouse of the Macintosh to create something. She opens Macpaint and creates an abstract piece of art. Stunned by her creativity with using such a device, he saves the picture and agrees to pay more for child support.

Skip ahead to 1988 where Steve is voted out of Apple and struggling to launch his new NeXT computer. Lisa has grown a little wiser and in much need of her father. They have a quiet moment in the rafters of the stage where they chat about music. Steve still has his barrier up when talking to his daughter that he hasn’t fully embraced, but you can see that wall slowly come down the more he digs into Lisa’s brain. Eventually Lisa gets tired of playing games with her father and hits him an emotional plea that digs deep. It isn’t until we skip ahead again to 1996 on the unveiling of the new iMac that Steve finally lets down his genius shield to at least attempt to be a father. Not a great father, given his track record, but still a father.

Of course, there is plenty of screen time devoted to Jobs’ technological contributions and his problems working with others. Sorkin has plenty of experience conceiving such scripts having penned the screenplay for the equally powerful tech drama The Social Network. All of Jobs’ flawed business connections are trotted out behind the stage as well for just the right amount of drama, never lingering too long on the details. We get to see his bitter feuds with John Sculley (Jeff Daniels) as he forces Steve out of Apple. We witness the complicated friendship he shares with Steve Wozniak (Seth Rogen) that quickly descends downhill as they grow apart through production teams. Jobs’ constant angel on his shoulder is the dedicated Joanna Hoffman (Kate Winslet), constantly trying to steer him in the right direction despite being flicked off to the side for Steve’s ego.

The casting is genius. Michael Fassbender may not completely embody the look or voice of Steve Jobs, but he nails all his mannerisms and personality with a palpable hit. From the cocky smile in forming ideas to the flicker in his eyes around his daughter, Fassbender does some of his best work the way he melts into this role. The same goes for the rest of the cast that favors acting over looks. Rogen and Daniels don’t really go out of their way to look the part, but they fill the roles out nicely with their natural abilities. The only actor that seems to throw themselves deeply into the appearance as much as the character is Kate Winslet. With her thick glasses and scarf of the 1980’s to her updated fashion of the 1990’s, she certainly echoes Hoffman much more than I expected out of her. She commands the screen just as well as Fassbender in any of the scenes they share.

Steve Jobs is the most deserving picture of such an icon - celebrating his achievements and his flaws while seeking some humanity in all of it. The combination of Boyle’s direction, Sorkin’s writing and Fassbender’s performance is a match made in heaven. It may not dig quite so deep into the enormity of Jobs’ life, relegating all of the picture to his backstage rants and laments, but it hits the most entertaining aspects I wanted to see out of a Steve Jobs movie. I’ve seen the picture where I learn about Apple’s conception and the revolution of the iPod. Boyle’s picture gives us something more - presenting Steve Jobs as more of a man than a genius. This ultimately makes him a little more human after all the bridges he burned and the people he insulted. And isn’t that worth more than just skirting over his life to get to the invention of the iPhone?