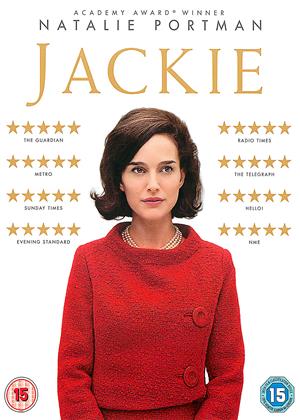 Makes you wish someone would shoot you in the head. - Jackie review by RS

This movie is a very impressionistic portrait of Jackie Kennedy between the Dallas assassination and Kennedy's funeral, told in flashback whilst Jackie Kennedy talks to a writer. I was looking forward to the film due to the great reviews, but found it very slow and lacking any real plot. Although impressively shot, it suffers from very intrusive music, with sweeping strings semaphoring what you are supposed to feel. Natalie Portman's performance was very good, but although the film is only 95 minutes long, it felt much longer, and by the half-way point I was beginning to wish that someone would shoot me in the head.

For a short movie, this feels long. Maybe because very little happens.

I can imagine the script conference for this when they said: "well, the story is that Kennedy gets shot and his wife was there, so we need to pad it all out for make a movie to exploit the rich seam of Kennedy interest out there and make money."

It's like those dire movies on Princess Diana's life - like this, they often seem to have French involvement for some reason.

A weird central role by Natalie Portman acting like one of the Stepford Wives (maybe Jackie was like that?). John Hurt pops up as a priest is what is maybe he last appearance.

This is really a slick exploitation flick. AND it would have been interesting to have information on screen at the end about what happened to various real-life characters (for example, I think the toddler JohnJo in this film died in a plane crash; Bobby Kennedy was assassinated in 1968 etc. Another Kennedy Senator was a Noraid IRA supporter).

But it passes the time, I suppose. Just don't expect much. 2 stars. Just...

Divisive maybe, but I loved it - Natalie Portman has never been better - Jackie review by JB

I feel this is a movie that will divide audiences - it's fragmentary, doesn't deliver a clear linear narrative but what it lacks in a straightforward approach to its subject matter, it gains by providing something that tries to be more rich and more beautiful. It's not a typical Oscar movie or traditional biopic. It depends on your sensibility and expectations of a biopic, so I'd recommend it to film fans who like coming at a story a little sideways, rather than those who want something more clear-cut and unchallenging. This is not a movie to unwind to!

The spine of the film is an interview of Jackie Kennedy conducted by a reporter, some months after the Kennedy Assassination, after Jackie has moved out of the White House. She is in control of the interview from the outset; self-editing, self-conscious but always imperious. The movie then flashes back and forward between the interview and several key moments in her life as First Lady - her 1961 'tour of the White House'; and the events immediately before, during and after JFK's assassination.

Natalie Portman portrays Jackie Kennedy as a woman who needs to play multiple roles - a mother, a wife, First Lady, a cultural icon and 'mourner in chief' and the fragmentory nature of the film allows a 360 degree view of all of this. Quite impressive, considering its c. 90-minute running time. I loved her! The supporting cast is great and varied (although mostly merely extended cameos - Jackie is in every scene, and dominates every moment). Shout out to the Mica Levi soundtrack - some may find it invasive, but it's on par with the music in films like There Will Be Blood (the music there is by the fabulous Jonny Greenwood) and Levi's work in Under the Skin. It adds a woozy, occasionally nightmarish, mood and is completely on par with the self-conscious nature of the storytelling.

it was a real effort to watch this film to the end, despite every effort I failed. it is boring beyond endurance. there is nothing here for you unless you are already a fan of the Kenedies. you would be better of reading a bit of history.

I was interested in the subject of this film & that is why I wanted to watch it, but it became a bit boring & I began to wonder if Jackie was really like the film said. Poignant but slow.

Not credible, the script and characters did not convince. The subject warranted a serious approach. There was nothing to it, it used the real event to carry what was a stilted portrayal with poor casting. Very disappointing

Film was okay, very irritating though as Natalie Portman whispered all the way through the film plus, disjointed in context .

JFK’s assassination has slowly risen to become a quintessential zeitgeist equivalent to a Shakespearean tragedy of the 20th century. After all, even today’s polls put people on the fence when it comes to who was the perpetrator, planner, and executor of the infamous deed, as well as the motivations and logistics behind this earth-shattering event. With all of that being said, the political figure of Kennedy still remains intact and idolized – despite the scrutiny of his brief occupation at the White House and the politics that he brought to the table. And so, Pablo Larrain's Jackie tells of his legacy through none other than Jackie Kennedy, who tries to put the pieces together after the unexpected death of her beloved husband John.

The film uses an interview between the widow Kennedy and a reporter to retell the events of the past week as the occurred from the focal point of Jackie. Which is where the film’s weakest point lies; namely, the screenplay gravitates towards building a conflict out of nothing, which ultimately surmounts to nothing in particular – nor it gets a worthy conclusion of this narrative thread. Nonetheless, Jackie is still a force to be reckoned with: both on-screen and personality-wise as well.

Then we have the flashbacks, which play out in a non-linear fashion, intersecting the events surrounding Jackie’s stay at the white house with her grievances after the key event took place. The nature of how all of this is told may potentially divide moviegoers into two fronts: those who seek linear storytelling to crave their appetites, and those who lean more on the disgruntled fashion of director Pablo Larrain's unconventional choices side. Whatever the case, Jackie does not implicitly convey these narrative dissonances, but rather it takes them as granted, plays with them, and derives a truly unique experience masked as a biopic of JFK murder’s aftershock.

Despite all of that however, Jackie is not about JFK; it’s a character study of Jackie Kennedy trying to cope with the overwhelming grief that hangs above her demeanor like cloud full of rain that’s just about to burst. Lazy analogies aside, this is extremely well captured through the use of a grainy 16mm shot, combined with a 1.66:1 aspect ratio and a tight framing. It’s no wonder too, since the film’s cinematographer Stéphane Fontaine is perfectly aware on how to capture subtle emotions on screen, without it seeming too blatantly obvious, or god forbid: by using handheld. And so, the surrounding façade tells perfectly of Natalie Portman’s character emotions (Jackie), her responds to the situation-at-hand, her wants and needs, and her deep sorrow as conveyed via the bleak interior in which the interview takes place.

Finally, Jackie is a very interesting film, and going in it would require leaving some preconceptions and expectations at the door, which you can undoubtedly pick up later.