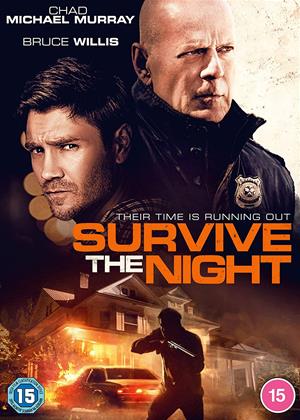 Reviews of Survive the Night

Akin to a singer taking up residency at a club in Las Vegas, Bruce Willis has settled for the bargain bin of direct-to-video or bound-for-video action pictures. Long after Willis has past from this world, some distributor will put out a massive box set of 50 Bruce Willis films (Die Hard not included). Survive the Night will be lost among them and no matter how hard the distributor will try to organize the titles, the consumer will be consumed as to which film was the one where Willis was a doctor that killed some gangsters. “Was that Death Wish?” “No, this one was entirely within a house.” “Oh, was that Act of Violence.” “Nah, he wasn’t a doctor in that one.”

To the film’s credit, however, Willis is more utilized as the protagonist in this feature rather than appearing as a shoved-in cameo for that marquee value. He plays a doctor with a family that finds his suburban home threatened by a gunmen and his crew. The gunman had a botched job where one of his men is shot and requires medical attention. The gunman threatens Willis to fix his friend or he’ll slaughter him and his whole family. Given how old Willis appears and being a doctor, it’s understandable that the gunman would not expect this guy to take charge and become a killing machine.

For the audience, however, we see it coming a mile away. This is Bruce Willis, an actor who has literally played a doctor who kills his aggressors in a film from two years ago. But does it matter? He could be playing a former army medic or failed med student or an over-the-hill pharmacist. It doesn’t matter so long as the gunman needs him. He has a wife and son who is a doctor, but does it matter? It could be a dog or his mother or his uncle, as long as someone can be held hostage. At this point, pretty much every Bruce Willis movie is the product of a randomized generator: “Bruce Willis is a [profession] that fights gun-toting bad guys to save his [personal hostage] in [generic action title].”

And I realize that’s unfair because I should be judging the film more on its own merits. Sadly, it’s the same bland bit of dime-store action of Willis’s previous dead-on-arrival movies. The entire story takes place inside a house where Willis sometimes hides in the dark and lures his attackers into a fight. He protects the innocent, punishes the wicked, and third overused line to describe a badass. The action is competent but lacking that extra bit of grit to be anything more than a budgeted blur of bloody showdowns. Willis gives his usual dreary performances of standing around stone-faced and bored until there’s someone to punch or shoot. I can’t help but feel he and Steven Segal should be in a buddy comedy to see who can be more emotionless and tired.

If you want further proof that this film is doomed to be a blur, it was directed by Matt Eskandari, a rising action director who had previously directed Willis in a film from last year called Trauma Center. It’s just as bland with its action elements, but Willis doesn’t play a doctor in that film, instead playing a cop. You can just hear the conversation now. “Wait, the one where he was a doctor, was that Trauma Center?” “No, he was a cop in that one.” “I thought he was an ex-cop.” “No, that was Reprisal.” “I thought he was a CIA agent in that.” “No, that was Extraction.” “Wasn’t that a Chris Hemsworth movie?” “No, different Extraction.”