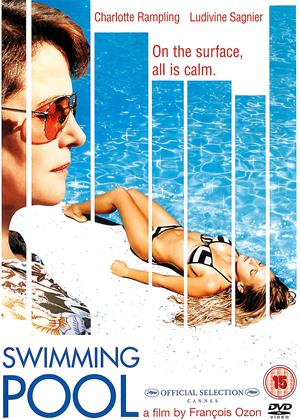 You think you know what's going on, but at the end...?? It may be wise to watch twice to be sure what is reality and fiction in this film. If you listen carefully you might be able to disentangle who's who. Good performances by the two actress.

This film started off ok, Charlotte Rampling giving a great performance as usual. However, about half way through it started to lose the plot, so to speak, and the ending was a bit lame and very unbelievable..

The Plunge of Life - Swimming Pool review by CH

How does one depict writing on the screen. At several points in Francois Ozon's Swimming Pool (2003) a crime novelist (Charlotte Rampling) reaches for her laptop to add to the word count of the latest case for her Inspector. This can hardly be something to engross the viewer; in fact, it provides a space in which to ponder everything that we have seen happen around her.

On the face of it, this is not much. Weary of her series, she has been persuaded by her publisher (Charles Dance) to retreat to his poolside villa in the Luberon and let inspiration flow. As is the way of sunny idylls, there is an incursion.

Crashing through the door one day is Ludivine Sangier, the wild and beautiful daughter of Dance by a dead lover, neither of whom was known to Charlotte Rampling (something which upsets her notion that in life one should have a novelist's omniscience). Ludivine lives for drink and men; there seems to be as many of the later as there are bottles; flesh and glass alike are thrown out when used up.

All this disturbs a writer's peace – and provides a variant upon the Inspector's increasingly routine investigations.

Beautifully made, in and out of the water, the film does not shy from lingering, and takes on a dreamlike quality. As the minutes go by, one wonders what is really happening to all these people. Are they a part of life itself or the imagination? And, for all of us, do these overlap?

See it on one's own with pleasure; and with others, it brings debate that could see off another bottle or more. And express surprise that Charlotte Rampling writes directly upon the screen.