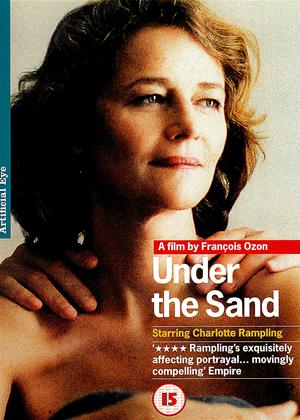 Synopsis:
In Francois Ozon's absorbing and affecting drama, Charlotte Rampling gives one of the best performances of her career as Marie, a college lecturer who has been happily married to Jean for over 25 years. Whilst on holiday, they visit a deserted beach where Marie lazes in the sun while Jean sets out for a swim - from which he never returns. Some time later in Paris, Marie has resumed her life but refuses to accept that Jean has drowned, continuing to think of him in the present tense and resisting her friends' well-meaning attempts to interest her in other men. Ozon's most mature film to date, 'Under the Sand' is dominated by Rampling's astonishing and moving portrayal.
Actors:
Charlotte Rampling, Bruno Cremer, Jacques Nolot, Alexandra Stewart, Pierre Vernier, Andrée Tainsy, Maya Gaugler, Damien Abbou, David Portugais, Pierre Soubestre, Agathe Teyssier, Laurence Martin, Jean-François Lapalus, Laurence Mercier, Fabienne Luchetti, Jo Doumerg, Michel Cordes, Maurice Antoni, Patricia Couvillers, Patrick Grieco
Directors:
François Ozon
Writers:
François Ozon, Emmanuèle Bernheim
Aka:
Sous le sable
Studio:
Artificial Eye Film Company Ltd.
Genres:
Drama
Countries:
France, Drama

Reviews (1) of Under the Sand

It's all about Rampling - Under the Sand review by JB

Charlotte 'The Look' Rampling has had a wonderfully idiosyncratic film career giving a lot of great performances in some fascinating and distinctive movies (who else would have starred in Max Mon Amour, as a woman having an affair with a chimp?!) but this could be her best role and she acts everybody off the screen with it.

As a woman grieving, she's caught between a sort of fantasy existence imagining her missing, probably long-dead, husband by her side as she's almost falling into a new life without him. Rampling employs 'The Look', of course but there are many layers here... Passion, longing, horror, resilience, profound sadness, hope.

The film is understated almost restrained, but also quietly sophisticated. Occasionally director Francois Ozon lets the soundtrack and imagery overwhelm. It's not the best film Rampling has been in, although it is broadly excellent. But it's possibly the best performance she's ever given.