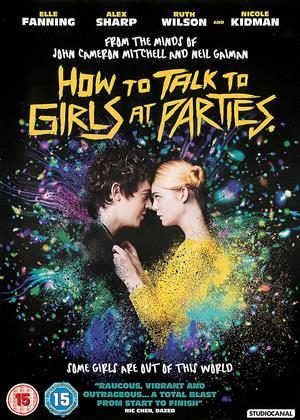 Rent other films like How to Talk to Girls at Parties

Reviews (4) of How to Talk to Girls at Parties

Why bother talkng to girls at parties when they just bugger off and leave you at the end anyway . - How to Talk to Girls at Parties review by porky

Not Funny, Not Clever and Not really very interesting .

Felt like watching an old episode from the 'Comic Strip Presents' series of Comedy Dramas from the 1980's.

Mish mash of genres, a bit odd, overly long and not very engaging. - How to Talk to Girls at Parties review by EP

Even Nicole Kidman can't save this cheaply made sci-fi comedy love story "space oddity"...watch something else.

Punk Sci-Fi Mash-up that's only Partially Effective, But set in sunny Croydon! - How to Talk to Girls at Parties review by PV

This starts well - all about punk in 1976 and schoolboys.

Then it morphs into a wacky aliens in Croydon adventure which seems like a spoof of itself.

I am not really into scifi so I lost interest really then - I'd have preferred a film about punk with no weird alien plot.

BUT that isn't the fault of the film makers - it's all based on a Neil Gaiman story, so blame him!

AWFUL, ABSOLUTELY DREADFUL!!¬ - How to Talk to Girls at Parties review by S.S

One of the worst movies that have ever existed, it wasn't even worth making let alone watching! It was that bad i had to turn it off and watch another movie!!

Just cheaply made, unbearable to watch to be honest!

While the oddness of How to Talk to Girls at Parties has nowhere near the same level of social and political commentary akin to Sorry to Bother You or Get Out, it still shares a bizarre and surprising nature that almost warrants a blind viewing for the sheer shock of it all. Another apt comparison is that of From Dusk Till Dawn; starting off with the typical dressing of one genre, only to bleed and switch gears into another one that blindsides the audience. And while the film never says much past its genre surprise party, I can’t fault the film for being a left-field romp.

See if you’ve heard this story before. The young and impressionable Enn (Alex Sharp) and his friends are seeking some fun in the 1970s punk atmosphere of London. They want to be included in the punk scene and become a part of one punk rock hangout helmed by the stern Queen Boadicea, brilliantly played by Nicole Kidman. They desperately want to get laid and think they’ve found just the party where they think this will happen. The party involves a bizarre cult but they merely brush it off as a weirdo excuse to have a good time. Enn is certainly willing to excuse it for being able to make out with the lovely Zan (Elle Fanning). He doesn’t think too hard about her claims of being an alien and that her cult is really an alien colony staging a rite of passage on Earth. But the more his friends get involved with this group, the more they start believing it.

Based on the sci-fi novel by Neil Gaiman, director John Cameron Mitchell does a decent job slowly weaving in the weird. The cult is kept just strange enough with its intricate hierarchy and lineage that is addressed with the odd concern of the duped humans. It’s also a hoot to watch them bicker as the members include Ruth Wilson and Matt Lucas as the leaders. But we become just as intrigued as sex hungry boys with these aliens, including their weird rituals of sex that always seem to turn into threeways worthy of a David Cronenberg erotic nightmare. To even explain the mechanics would be a major spoiler.

While I dug the film’s oddness that sneaks in among the punk rock scene, I wished it invaded even further. The blending of the psychedelic aspects comes off a little too avant-garde at times, trying to strange cryptic dreams and tantric visions among Enn’s states of consciousness and euphoria. Sometimes it works and I was willing to go along with the ride, while other attempts come off as just odd for the sake of odd. And the whole let’s-go-rock young punk story is staged with all the hallmarks that come off much more standard than natural, as though the film is in such a rush to get going the set dressing comes off slapped together.

While never truly becoming a surreal trip of a sci-fi romance, How to Talk to Girls at Parties has its little moments of brilliance in its genre-bending stew. The aliens are weird enough to be intriguing, their sex acts bizarre enough to open eyeballs, and the quirky hookups between the alien and human characters offer some pleasing chemistry. While a bit of a mess at times and wrapping things up a little too neatly, I can’t deny there’s an appeal to the picture, even if it really won’t teach you to talk to girls at parties (unless those girls are members of an alien cult).