Rent Hector and the Search for Happiness (2014) 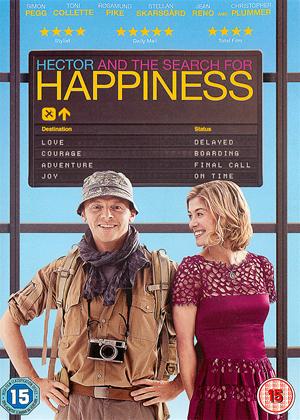 Reviews (3) of Hector and the Search for Happiness

Hilarious, poignant, well-plotted globe-trotting movie from a French novel - Hector and the Search for Happiness review by PV

I loved this film - which follows psychiatrist Hector as he travels the world in a search for what makes people happy.

A philosophical concept, so no surprise that it is based on a French novel. It is, I suppose, a modern-day version of Voltaire's Candide.

Anyway, this globe-trotting technique keeps up the pace and means that, if you dislike one section, there'll soon be another in another country.

Personally, I liked all the scenes but probably liked the ones set in London and LA least. The ones in China are fascinating, and those in Africa just wonderful and realistic (and how different from sentimentalist fiction such as Africa United).

The end drags just slightly, but not enough to spoil the film.

Great plot, lots of laugh out loud moments, interesting characters + good acting and direction. What more do you want from a film?

Good pace, humour, travel, some tension (but not too much),relationships - and you just gotta love Simon Pegg.

Based on the novel by François Lelord, Simon Pegg takes Hector and the Search for Happiness to the big screen. The film is entertaining, but unfortunately full of holes and cliches that make you want to skip it because you have seen the same and better before.

The film follows Hector. He is a psychiatrist who can’t connect with his patients. He is successful at his job, but cannot help his patients in discovering one very important thing: what makes people happy? One day, Hector decides he must leave his job, his wonderful girlfriend (Toni Collette), and the life he has known, to travel around the world to find the answer. He travels to Asia, Africa, and around the United States of America, meeting new people and experiencing things he never knew that he would. Will Hector discover the key to happiness, or is it all for nothing?

If the story sounds familiar, that’s because we have all seen it before. We saw it in The Secret Life of Walter Mitty, we saw it in Eat, Pray, Love, and we have seen it in other films and television shows. The film is funny, emotional, and relatable. It is entertaining with the changes in scenery and the colourful characters we meet, but when you look at the individual pieces of the film, it all starts to fall apart.

Simon Pegg has such a huge fan following, but it is important for these audience-goers to know that Hector and the Search for Happiness is not like the other films that Pegg is known for. The acting was not the problem with the film, in my opinion. Pegg was great, and so were his co-stars, who I am sure most people will know (Toni Collette, Rosamund Pike, Christopher Plummer, and Stellan Skarsgård). They all added positively to the film, and was why I didn’t score the film lower.

This theme of searching for happiness will make the film appeal to all generations. It could actually be something that brings people together. Everyone thinks they are the only one that isn’t happy, and that everyone is having fun without them. It is not true, and this film might help show that everyone is truly in the same boat, searching.

Besides the acting, the other major positive aspect of the film was the scenery. Director Peter Chelsom has captured the different landscapes beautifully, and helped the audience to be taken to these foreign places with Hector.

Online and in-print reviews have given it mixed to negative scores, but general audience members are at least finding some enjoyment in it.

Maybe if you don’t think too much, and don’t pull at the thread, you will enjoy this film. I think it’s a hit and a miss, but anything that tries to bring people together and make people happy is a beautiful thing.